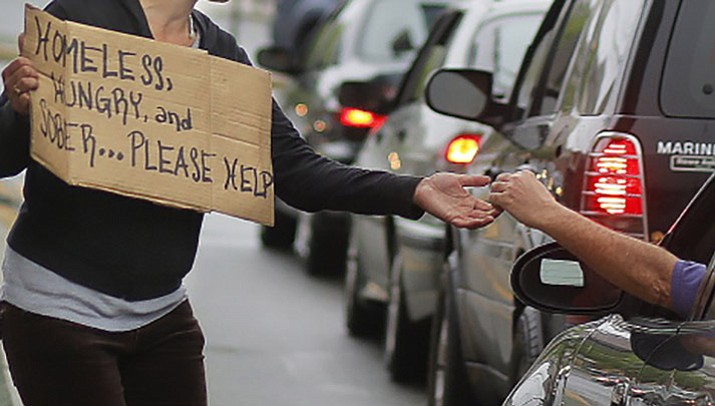 • HOMELESS 2 – I caught up with Mayor Greg Mengarelli this week to talk about “Change for the Better” and how it works with the city’s 2013 ordinance that restricts panhandling.

The City of Prescott is moving ahead with Change for the Better, a campaign and actions designed to discourage panhandlers and funnel money toward services to help the homeless, among other things.

The result is creating a balance, making an effort to move forward, and education.

“I think typically people who call in don’t like the panhandling behavior … but they are not truly victimized,” Mengarelli said. “The ordinance requires a victim to aid in prosecution; and people typically don’t want to pursue it.”

The Mayor described a situation as an example. There’s the elderly lady leaving a local grocery store and someone asks for a handout; she feels forced to give since he is standing between her and her car. “In that case, she gives … (and) some could interpret that as aggressive. I want to stand up for people who aren’t going to say anything, and stand up for the silent victims,” he said.

“I think you have to have the ordinance, but also a program that discourages panhandling. It’s not that I want to fully expose all of them, there are some people with legitimate needs. The cash need escapes me, but that’s why we want to address this with services.”

Change for the Better would help people who are down on their luck and direct attention and resources on the topic. It will include: signs downtown, urging people not to give directly to panhandlers; parking meter-style collection locations, where people can donate to support local efforts to help the homeless; donation boxes in businesses; barriers on park benches and landscaping in public places designed to discourage the homeless from sleeping there; and, among other finer points, a work program that will offer jobs to homeless people.

“Now, is there such a thing as being so successful with our services we begin attracting panhandlers?” Mengarelli said. “I see this with new people coming to town … to get out of the heat. I’ll just say it: We’re almost too generous, if there is such a thing.

“We need to stand up for people who are uncomfortable, in that awkward situation.”

I can see what he means. The ordinance and the new campaign are tools that should work in conjunction with each other.

“Some of it will work, some of it won’t. We will keep an open dialogue with the providers. We’ll tweak it if necessary,” Mengarelli added.

And, in the end, I can read between the lines: they are trying to do this in a positive way, but they really want to do something for those who feel intimidated.

• BY THE NUMBERS – The 2013 ordinance against panhandling has seen some mixed results and interpretation.

From adoption (April 2013) to 2015, there were 28 warnings and 17 criminal citations, according to Prescott Police stats Mengarelli released. Five of those warnings and seven of the citations fell in the “aggressive” category.

According to an email from the City Manager’s office, the lapse happened when the City Prosecutor “required the identification of a victim,” a requirement that has now been lifted. That makes sense, with Mengarelli advocating for the silent victims.

The city’s email states we will likely now see police “increase the use of (the ordinance) for enforcement purposes.” And, “I would add that many individuals ‘flying sign’ or panhandling are very aware of the law and conduct themselves in a manner to avoid violating the City Code,” the email states.

The 2013 ordinance restricts panhandling in an aggressive manner in a public area; within 15 feet of an entrance or exit of a bank or ATM; and on a public sidewalk, street or other public grounds in a manner that impedes or obstructs the free flow of pedestrian traffic during a special event or parade.

The ordinance does work. Maybe the two – the ordinance plus Change for the Better – will strike the perfect balance.

What do you think? Email me at twieds@prescottaz.com.

• PICK OF THE WEEK – (Proving there’s always something good to do in the Prescott area that’s cheap or free): Epic Rides’ Whiskey Off-Road, of course! Get yourself to downtown Prescott this weekend for the races, vendors, live music, and much more. Visit dCourier.com for more details.

Tim Wiederaenders is the senior news editor for The Daily Courier and Prescott Newspapers, Inc. Follow him on Twitter @TWieds_editor. Reach him at 928-445-3333, ext. 2032, or twieds@prescottaz.com.