Day One of two-day walkout for Humboldt teachers, staff
Principals, administrators report to work as usual 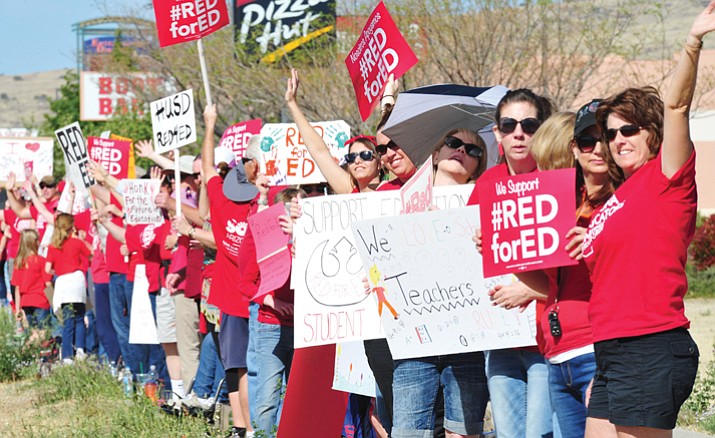 It’s not yet summer, and hopefully it’s not forever. For two days this week, however, school’s out in Humboldt Unified School District.

So what did teachers, staff and administrators do Thursday on the first of a two-day walkout?

At each of the district’s 10 sites, school principals reported to work at their respective schools. At some sites, phones went unanswered, indicating front office staff were out or left early for the day.

Perhaps they carpooled to Phoenix to participate in the march to the state capitol. Some picketed along Highway 69 in their #RedForEd shirts, holding signs supporting education.

Bradshaw Mountain High School Principal Kort Miner said his teachers and staff met Wednesday to talk about transportation plans for the Phoenix march. He estimates about 80 percent went to Phoenix, and the remainder appeared at the Yavapai County Courthouse in Prescott or along Highway 69.

“Overall, it was a productive day. But we did miss our staff and students,” Miner said.

Mountain View Elementary School Principal Joanne Bindell struggled to describe her day. “It feels like the end of the school year, it’s kind of sad. I don’t know what to say. It’s different, that’s all I can say,” she said.

Bindell kept an eye on social media and reported seeing photos from many of the Humboldt’s teachers participating at the state capitol. Other than that, she said she spent the day getting caught up on paperwork. One teacher came in to get Google certified, and the school was open to students for breakfast and lunch.

At four school sites, staff prepared breakfast and lunch for students who rely on meals provided by the district. Superintendent Dan Streeter reported the district served 70 breakfasts and 150 lunches Thursday. Two of those campuses have a free-and-reduced-lunch population over 80 percent, he said.

In between meetings with his planning committee, Hungry Kids founder Ron Barnes, Educational Leadership Team, the IT Department, Prescott Valley Chamber of Commerce, and an appearance before the Prescott Valley Town Council, Streeter, too, discovered photographs posted online, including one of four teachers and two parents meeting with Rep. Karen Fann.

“A lot of our teachers are down there (Phoenix). My wife, for one, was down there,” he said.

He’s exploring the amount of instructional minutes with the district’s IT employees to determine what the impact of losing school days might have on the year’s calendar.

“If only today or tomorrow, we will have to do a little bit of adjustments with schedules, but we will be pretty close to at least working off our current calendar,” Streeter said, adding that extending Wednesday’s early release days to a regular full day is one possible solution.