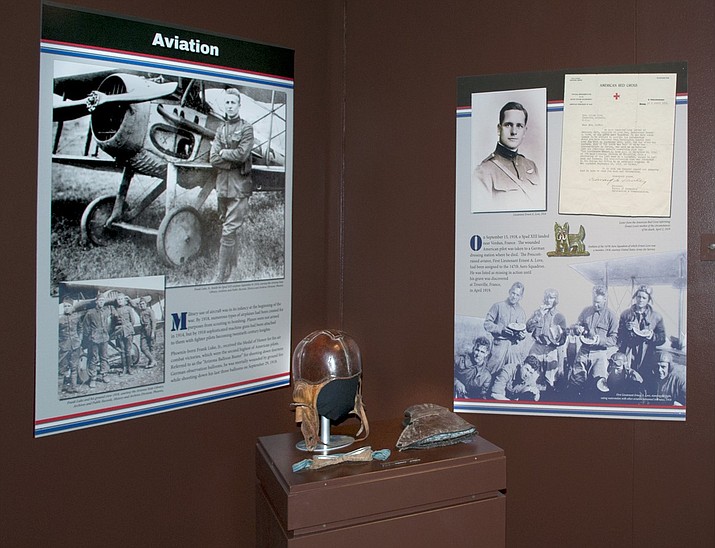 Arizona had been a state for less than five years when the United States — on April 6, 1917 — joined the “Great War.” By that time, it had been raging in Europe for five years.

“Arizona and the Great War” is the Sharlot Hall Museum’s featured exhibit through Armistice Day, Nov. 11.

The exhibit shows how the newest state in the nation adapted to a wartime economy on the home front to support American troops “Over There.”

The exhibit includes a recreated trench, where visitors can stand side-by-side with infantry soldiers in the congestion and mire of ‘home’ on the front-lines, complete with authentic artifacts — like barbed-wire cutters and gas masks — from the era of America’s participation in WWI, 1917-19. 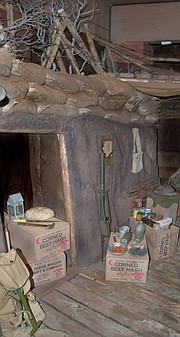 Recreated trench is part of the exhibit.

Information panels in the museum’s main gallery depict the various sacrifices made in Arizona for the war effort — including the draft, rationing, “victory gardens,” Liberty Bonds and war savings stamps.

The “Great War” exhibit also shows the impact on the young state from nationwide concerns about how to fund the war effort, how to train, equip, feed and move a million-man army, how to secure nationwide transportation, communications and wartime production of goods and material.

“This new exhibit is both nostalgic and heart-warming,” said Fred Veil, executive director of the museum, which will celebrate its 90th anniversary in June.

Of the exhibit, Veil said, “It portrays a time of resolve and sacrifice, when Arizonans were thrust from a simple existence into the midst of a global conflagration. It further portrays the celebration of victory, the agony and despair of loss, the pride of new-found patriotism, and the impact of such global engagement as the infamous influenza pandemic with its effect on families at home.”

The exhibit also features the tragic stories of Arizona’s heroic “fly boys,” WWI aviators like Frank Luke, a medal of honor recipient, and Ernest Love, of Prescott, including their personal memorabilia, a vintage leather flying helmet, goggles and gloves of the type they wore.

The museum is located at 415 W. Gurley St., Prescott, two blocks west of the courthouse plaza. The price of admission is as follows: $9 adults for adults ages 18-64; $8 for seniors, 65 and older and military, with I.D., whether active or retired; $6 for college students, ages 18-25, with I.D.; $5 for youth, ages 13-17. Admission is free for children 12 and younger and for those of any age with a Sharlot Hall Museum Membership.