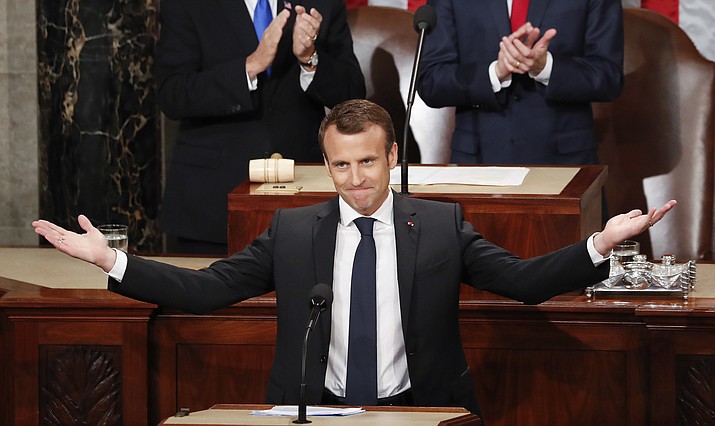 French President Emmanuel Macron gestures as he is introduced before speaking to a joint meeting of Congress on Capitol Hill in Washington, Wednesday, April 25, 2018.(AP Photo/Pablo Martinez Monsivais)

Macron Urges US to Reject Isolationism by Associated Press

In the spotlight of a speech to the U.S. Congress, Macron was courteous but firm, deferential but resolute as he traced the lines of profound division between himself and Trump on key world issues: climate change, trade and the Iran nuclear deal.

A day after the French leader had put on a show of warmth and brotherly affection for Trump at the White House, his blunt speech prizing engagement over isolationism reinforced the French leader's emerging role as a top defender of the liberal world order.

"We can choose isolationism, withdrawal and nationalism. This is an option. It can be tempting to us as a temporary remedy to our fears," Macron said. "But closing the door to the world will not stop the evolution of the world. It will not douse but inflame the fears of our citizens."

Issuing a bleak warning, he urged against letting "the rampaging work of extreme nationalism shake a world full of hopes for greater prosperity."

It was a marked shift from the simpatico Macron of only a day earlier during his state visit at the White House. In his first year as France's president, Macron has carefully cultivated as close a relationship to Trump as any world leader can boast. But addressing a joint meeting of Congress — an honor granted only occasionally to leaders of close U.S. allies — Macron confronted his differences with Trump head-on.

As Trump weighs pulling out of the 2015 Iran accord, Macron made clear that France will not follow his lead.

He saved some of his most pointed comments on Trump administration policy for the issue of climate change, implicitly lamenting the president's moves to withdraw from the global emissions pact reached in Paris. Macron said that humans are "killing our planet" and added: "Let us face it: There is no Planet B."

"On this issue, it may happen we have disagreements between the United States and France. It may happen, like in all families," Macron said. "But that's for me a short-term disagreement."

It was an allusion not to an impending Trump about-face, but to the prospect of America choosing a different path under a successor, whoever that may prove to be. Asked by French reporters about his comments later during a visit to the Martin Luther King Jr. Memorial, Macron said with a smile that he doesn't expect Trump to rejoin the Paris accord, but does expect that America will.

Macron's hour-long speech to Congress, delivered in English, provoked obvious delight from congressional Democrats, who erupted repeatedly in cheers and standing ovations for the visiting Frenchman — a contrast to the mostly silent reaction from Republicans in the House chamber. To some, it was an ironic reminder that more than a year after being walloped by Trump in the election, Democrats have yet to coalesce behind either a cohesive message or a messenger, still plaintively searching for the kind of energetic, fresh-faced leader that Macron represents.

For Macron, the exuberant reception may have been equally ironic. At home, Macron does not enjoy the same level of applause or enthusiasm. A centrist in France, he's currently criticized more from the left than the right, notably for ending France's famed worker protection, and he's often derided as the president of the rich.

Still, his soaring speech to Congress and closely watched visit to the United States have buttressed the notion that Macron, more than any other world leader, now carries the torch for the rules-based international system of freedoms, free markets and democratic governance that Western nations have championed since World War II.

Trump's positions on trade and overseas obligations have chipped away at America's position as the spokesman for that movement. And German Chancellor Angela Merkel, seen in recent years as the inheritor of that role, has faded somewhat amid domestic political challenges in her country.

That France sees itself as uniquely equipped to help fill that void seemed evident as Macron called for communal action to address "urgent" threats to what he called fundamental values.

"Today, the international community needs to step up our game and build the 21st century world order," he said.

It wasn't all criticism from Macron. He sought to showcase the historic bond between the U.S. and France, touting the two allies' "constant attachment to freedom and democracy." Yet he also mentioned "fake news," a point of contention between Trump and others, and warned that lies disseminated online are threatening freedoms worldwide.

In friendly fashion, he recounted trans-Atlantic links from the earliest days of the United States, Macron talked about a meeting between Ben Franklin and the French philosopher Voltaire, "kissing each other's cheeks."

In an apparent reference to his affectionate rapport with Trump this week, Macron mused: "It can remind you of something."

G-7 summit in France a test of unity among world leaders
Trump, Macron seek to ease tensions before WWI anniversary
Trump portrays G-7 as a lovefest, papering over differences
Macron tries to arrange a Trump meeting with Iranian leader
Trump warns: Iran will pay if it restarts nuclear program