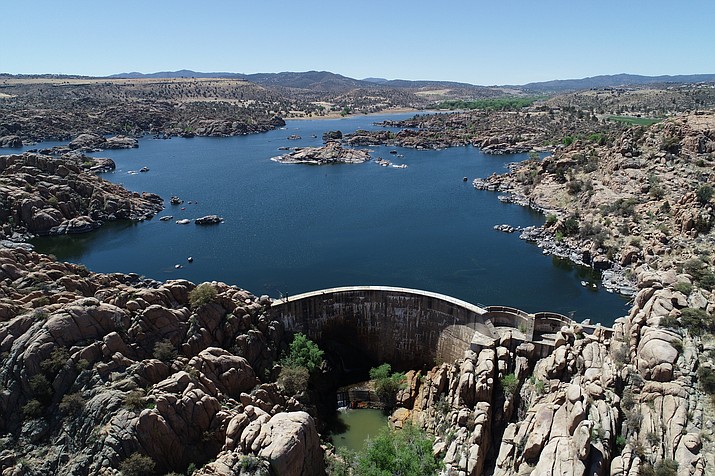 Work got underway this week on the City of Prescott’s $2.1 million project to rehabilitate the 99-year-old dam at Watson Lake. By Wednesday morning, workers had assembled barges near the lake’s boat ramp and moved them across the lake to the dam. The project is expected to take four to five weeks to complete. (City of Prescott/Courtesy)

The heavy equipment arrived at the lake’s south boat ramp Monday morning, April 23, along with more than a dozen workers.

Their mission: To repair a leaky valve in the 99-year-old dam, and to block and stabilize another valve located lower in the dam wall.

Along the way, the four- to five-week project will require work by divers, as well as the use of concrete trucks and cranes.

By Tuesday morning, they were loading up the barge in preparation for moving it across the lake to the dam.

By Wednesday morning, the barge was in place at the dam, and the two-phase, $2.1 million project known as the Granite Creek Dam Rehabilitation Project was underway.

“It’s going to be a two-step project to stop a leaky valve and stabilize an old 48-inch valve at the bottom of the dam with a thrust block,” Bay said.

The workers intend to use the barges to float concrete trucks out to the dam to provide a deck platform for safe access to the 36-inch valve.

To record the work being done on the leaky valves of Watson Lake’s 99-year-old Granite Creek Dam, a drone is being used to take video and still photos. On Monday, April 23, Brian Bucholtz, project engineer with Lyon Engineering, captured this shot from the Watson Lake ramada of the assembly of the barges at the south boat ramp at Watson Lake. (City of Prescott/Courtesy)

“While they’re out there,” Bay said, “they will also be installing a thrust block on the lower 48-inch valve to stabilize it.”

In all, the project will require about 24 cubic yards of concrete, said Kurt Hanks of Arizona Commercial Diving Services. The concrete trucks will be floated out to the dam on the barges in two rounds, he added.

Ultimately, the 48-inch valve, which is covered with sediment, will be abandoned — in compliance with requirements imposed by the Arizona Department of Water Resources (ADWR).

“This project was really initiated by ADWR when the City of Prescott took control of the Granite Creek Dam back in 1999,” Bay explained.

The city will benefit from the repairs by being better able to control its surface water in Watson Lake, as well as by bringing the deteriorating dam up to current standards, Bay said.

Watson Lake, which was built in 1919 to impound water from Granite Creek, contains two outlet pipes — one with a 36-inch-diameter valve, and another with a 48-inch valve.

In recent years, only the 36-inch valve has been operational, because the 48-inch valve is covered with sediment on the upstream side. The “thrust block” that will be installed in the 48-inch valve will protect against catastrophic failures, according to the city.

The valves were built into the dam wall to allow water to be withdrawn for a variety of irrigation-related purposes.

A crane is pictured on Tuesday, April 24, loading barges required for repair of the dam at Watson Lake. Workers assembled the barges at the lake’s main boat dock and moved the barges across the lake, where they will serve as the launching spot for the repair work on the dam’s valves. (Cindy Barks/Courier)

When the City of Prescott bought Watson Lake (along with the nearby Willow Lake) from the Chino Valley Irrigation District in 1998, the city began releasing water from the lakes and transporting it through a pipeline to its recharge field near the Prescott Airport.

There, the lake water has been used to supplement the amount being recharged into the aquifer. Since the late 1990s, it has served as a part of the city’s water portfolio.

While the city was able to recharge a record amount of water (3,861 acre-feet) from the lakes in 2017, this year has been a different story.

Because of the dry conditions, Bay said no water has been withdrawn from the lakes in 2018 for recharge purposes.

He noted that the only water that has been withdrawn has gone toward the city’s obligation to provide owners of the nearby Granite Dells Ranch with 375 acre-feet of water per year, if available.