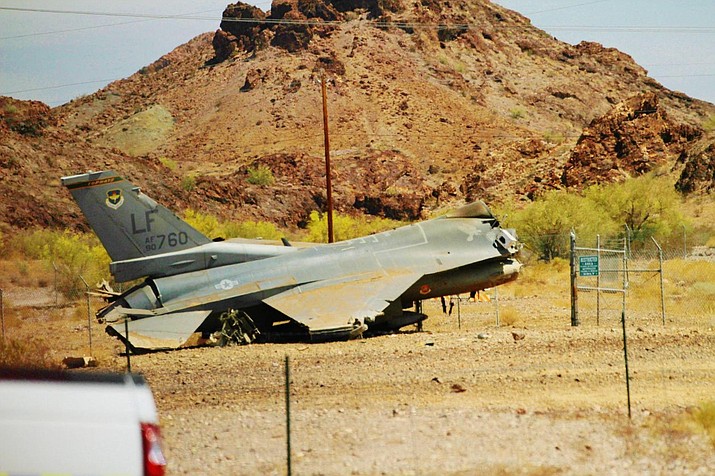 A damaged F-16 sits at the edge of the runway at the Lake Havasu City Municipal Airport Tuesday afternoon after the military jet made an emergency landing and skidded off the runway. (Brandon Messick/Today’s News-Herald)

A fighter jet crash landed at the Lake Havasu City airport Tuesday afternoon. Details about the crash were not immediately available, but no deaths were reported.

Road traffic was slowed near the municipal airport after the fighter jet rolled off the runway into a dirt area.

According to U.S. Air Force Staff Sergeant Jenna Bingham, the F-16C aircraft was assigned to the 56th Fighter Wing, based at Luke Air Force Base near Glendale. The plane diverted and attempted to land at Lake Havasu City Municipal Air Port at about 10:35 a.m. as part of a routine training flight.

During its landing, the aircraft rolled off the runway and the pilot ejected safely, Bingham said. The pilot was in good condition, and was taken away in a stretcher by medical personnel. He was being treated at Havasu Regional Medical Center.

From a distance, it was obvious the plane’s nose cone became detached during the crash, as did the front portion of the aircraft’s canopy, as result of the pilot’s ejection.

Airport officials would not comment about the crash, and Lake Havasu City police officers at the scene advised that pedestrians remain at a distance of at least 1,000 feet from the crash site because of safety concerns about chemicals and jet fuel.

Updates to this story will be provided as new details emerge.