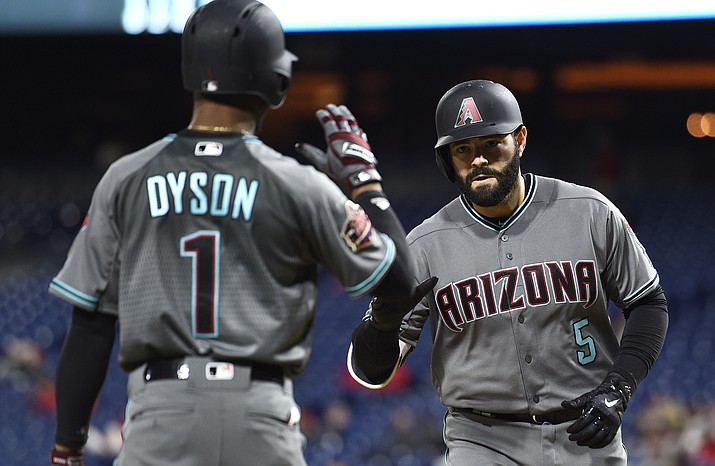 PHILADELPHIA — Alex Avila homered among his three hits and drove in two runs, Robbie Ray struck out 11 while pitching into the fifth inning and the Arizona Diamondbacks beat the Philadelphia Phillies 8-4 on Tuesday night.

Daniel Descalso and Jarrod Dyson also homered for the Diamondbacks, who upped their NL-best record to 16-6.

Ray was lifted after 107 pitches with two outs in the fifth and couldn’t earn the victory. He gave up three runs and five hits and walked three while raising his strikeout total to 43 in 26 1/3 innings. Fernando Salas (3-1) pitched an inning of relief for the victory.

The loss snapped Philadelphia’s seven-game home winning streak, and was just the club’s second loss in 11 games at Citizens Bank Park. A win would’ve given the Phillies their best home start in the franchise’s 134-year history.

Avila started his big night by leading off the third with a towering homer to deep right-center off Vince Velasquez (1-3) that caromed off the base of the second deck. Avila began the at-bat in a 4-for-35 slump with 18 strikeouts. Dyson followed with a long drive to right to put Arizona ahead 2-0. He was batting .160 before going deep for the first time this season.

The Phillies went ahead in the bottom of the inning. After Aaron Altherr’s one-out, bases-loaded double to right scored two to tie the score, Maikel Franco’s sacrifice fly to left gave Philadelphia a 3-2 lead.

The advantage was short-lived though as David Peralta hit a two-run double down the right-field line in the fifth after Velasquez loaded the bases with no outs by sandwiching a pair of walks around a single by Avila.

Arizona then went ahead 5-3 in the sixth on Avila’s one-out RBI single to right. The Phillies closed within a run in the bottom half on Cesar Hernandez’s two-out single to left. But the Diamondbacks padded their lead in the eighth with three runs, highlighted by Descalso’s two-run homer that made it 8-4.

The game was played on a chilly, rainy night in front of a sparse crowd of 18,195. Much of Philadelphia sports fans’ attention on Tuesday night centered across the street for Game 5 of the 76ers’ first-round series clinching victory over the Miami Heat.

Velasquez took a step back from a strong string of three straight good outings and couldn’t get through the fifth inning, allowing four runs on four hits in 4 2/3 innings with six strikeouts and two walks. It ended a span of 12 straight starts by Philadelphia starters with three earned runs or fewer. Velasquez entered having gone six or more innings in three straight starts after doing that just three times all of 2017.

Philadelphia’s Scott Kingery went 0 for 4 with four strikeouts. He has two hits in his last 24 at-bats with 12 strikeouts. Phillies C Jorge Alfaro struck out three times while going 0 for 4 and is now 8 for 47 (.170) with 24 strikeouts.