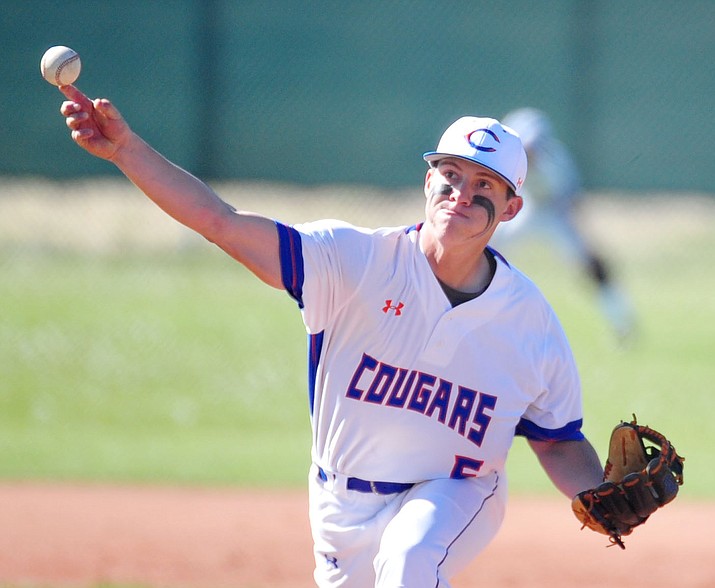 Chino Valley starting pitcher Tyler Hixon (5) delivers a pitch against Kingman on April 17, 2018, in Chino Valley. Hixon pitched a complete game in an 11-2 win over Wickenburg on Monday, April 23, to help the Cougars claim their second straight 3A West title. (Les Stukenberg/Courier, File)

WICKENBURG — For the second straight season, the Chino Valley baseball team can call themselves 3A West region champions.

On the bus ride home after an 11-2 drubbing over Wickenburg on Monday afternoon, a few groups of Cougars’ players were huddled around their devices, intently watching Odyssey Institute play rival Northwest Christian.

Just before the hill south of Prescott on Interstate 17, players let out collective shouts of joy as Odyssey upset the Crusaders 8-6, making No. 6-ranked Chino Valley the out-right region champion.

“We had spotty internet service the whole way,” Chino Valley head coach Mark Middleton said with a laugh. “But we’re champs again. We didn’t find out until we hit the hill coming into Prescott and the bus went crazy. It was a special, special thing.”

The reaction is well-deserved for a club that graduated nine seniors after winning the 3A West a year ago.

“A lot of teams took us lightly because we lost so much,” Middleton said.

Tyler Hixon was 3 for 4 with a home run and two RBIs, Ben Grandy had four RBIs and the Cougars claimed their seventh straight victory with an 11-2 rout over the Wranglers on Monday afternoon.

Hixon toed the mound for Chino Valley, allowing only two unearned runs in the first inning and pitched a complete game.

Grandy had three hits, while Michael Paulus was 2 for 4 at the plate in Monday’s season finale.

Chino Valley now awaits the Arizona Interscholastic Association to release the playoff brackets for the 3A conference. The Cougars should be ranked high enough when it’s all said and done to avoid the play-in round and be the home team when the state playoffs get underway Friday, May 4, in Surprise.