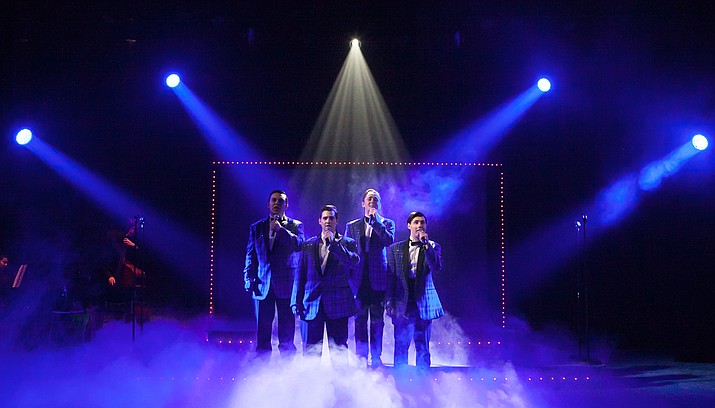 TheaterWorks, in Peoria. is bringing its production of “Forever Plaid” to Prescott Center for the Arts for three shows over the weekend.

Prescott Center for the Arts Executive Director Robyn Allen, who used to be the artistic director at TheaterWorks, said show director Steve Hilderbrand.

“She and our artistic director have been colleagues for many years,” Hilderbrand said. “They just thought it would be fun to do a little bit of an exchange of shows.”

Later on in the season, Prescott Center for the Arts will send its production of “Big River” to TheaterWorks, he said.

“Forever Plaid” is a fun, quirky combination of being a musical, a concert, a cabaret, and a revue, Hilderbrand said.

“It’s sort of all of those things rolled into one,” he said.

The story revolves around a male quartet similar to The Four Lads and The Four Aces on their way to do their first big concert, Hilderbrand said. However before they get there, they get into a traffic accident and find themselves wandering around purgatory with a chance to come back to earth for one night to do the show they never got to do, he said.

The show really has something for everyone to enjoy, he said. They just closed a three-week run in Peoria and people of all ages from junior high kids all the way up to senior citizens were coming in to see it, Hilderbrand said. The consensus was from everyone that it was a great show for going out and having a good time, he said.

“They all enjoy it on different levels, but the thing that everybody has in common is it’s just fun,” Hilderbrand said. “With the way things are right now in our world, there are some pretty serious things going on and for our audiences to come and see the show—it’s 90 minutes to just laugh and enjoy and get away from all those troublesome things.”

Kornukopia Calendar: April 20-29
Forever Plaid to reminisce with music of the '50s
Calendar of Events: April 20-24
PCA puts on ‘Guys and Dolls’ as first show of the season
‘Anything Goes’ at Prescott Center for the Arts