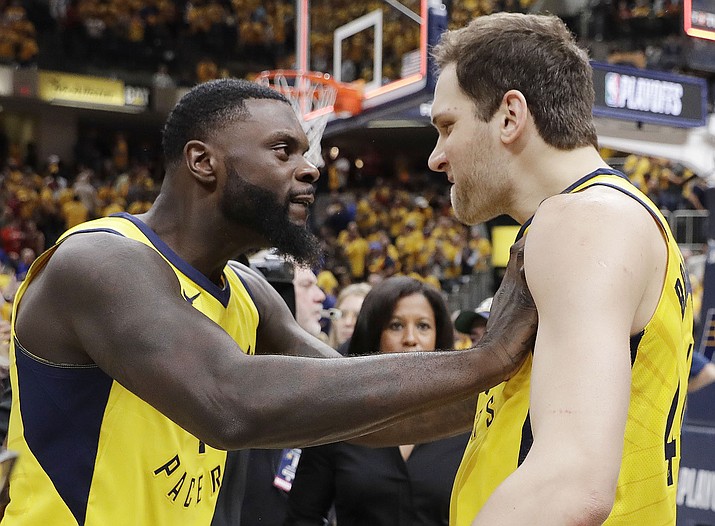 INDIANAPOLIS — Bojan Bogdanovic scored 30 points, leading the Indiana Pacers back from a 17-point halftime deficit for a 92-90 victory over the Cleveland Cavaliers on Friday night for a 2-1 lead in their first-round series.

Cleveland was 39-0 during the regular season when leading after three quarters and kept that perfect mark intact with a Game 2 win.

The incredible second-half charge came exactly one year after Indiana blew a 26-point halftime lead in a historic playoff collapse against the Cavs.

This time, the Pacers delivered a devastating blow to the three-time defending Eastern Conference champs — on a night LeBron Jones joined Michael Jordan as the only players in playoff history to record 100 double-doubles. James finished with 28 points and 12 rebounds, but it wasn't enough to prevent Cleveland from losing its first game this season after leading following the third quarter.

WASHINGTON (AP) — Bradley Beal heeded his coach's plea to "do his job" by scoring 21 of his 28 points in the first half, his All-Star backcourt running mate John Wall delivered 28 points and 14 assists, and Washington beat Toronto in an occasionally heated game to cut its Eastern Conference first-round playoff series deficit to 2-1.

After letting the Raptors grab the first 2-0 series lead in franchise history, the Wizards came home and checked off every box coach Scott Brooks presented. They got Beal more involved after he made only three shots in Game 2; they actually led after the first quarter, 30-29; they played with enough defensive focus to get produce 19 turnovers by Toronto, leading to 28 points for Washington.

Add it all up, and it was a rare recent victory for Washington, which had lost seven of eight games dating to the regular season.

DeMar DeRozan led Toronto with 23 points on 10-for-22 shooting one game after scoring 37, and Kyle Lowry had 19 points and eight assists.

MILWAUKEE (AP) — Khris Middleton scored 23 points, Giannis Antetokounmpo added 19 and the Milwaukee Bucks used a dominating first half to overwhelm the Boston Celtics 116-92 on Friday night, narrowing their deficit in the first-round playoff series to 2-1.

Eric Bledsoe and Jabari Parker each added 17 for the energized Bucks, who held the Celtics without a field goal for nearly an 11-minute stretch of the first half.

Milwaukee found its defense after a disheartening 14-point loss in Game 2, getting contributions from up and down the roster.

Al Horford scored 16 for the Celtics, who fell behind by 23 at halftime and got no closer than 76-62 with 3:06 left in the third quarter on Jayson Tatum’s 3-pointer.

Game 4 is Sunday in Milwaukee. The Celtics will need to get off to a much better start if they want to avoid going home for Game 5 with a 2-2 series tie.