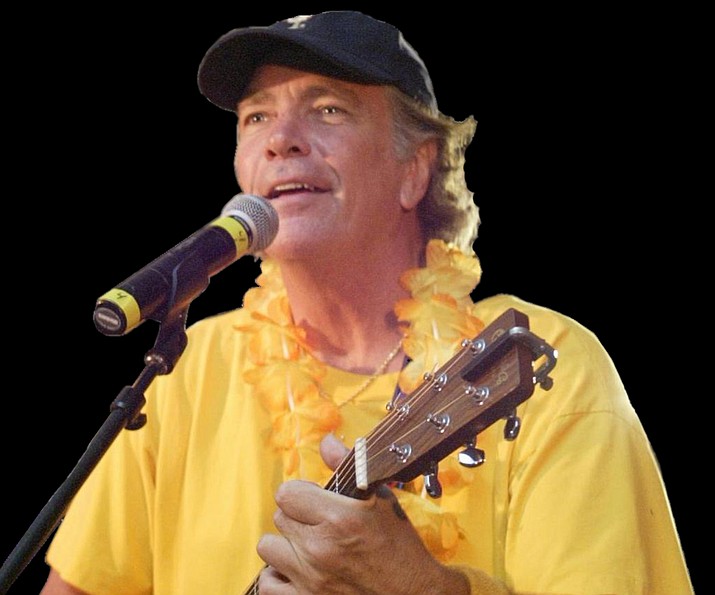 Barry Cunningham during one of his Jimmy Buffet performances. (Courtesy)

Of all the beach-inspired personalities in the world, Jimmy Buffett is the most famous and Barrie Cunningham is coming to Prescott performing a tribute known as “Adventures in Parrotdise.”

The name comes from an old TV show called “Adventures in Paradise,” a weekly adventure show from the 1960s, Cunningham said.

“I thought the name was kind of cool to just change it from Paradise to Parrotdice because of the Parrot Heads,” he said. “Jimmy Buffett fans are called Parrot Heads.”

Performing at the Elks Theatre and Performing Arts Center, 117 E. Gurley St., Cunningham takes the stage at 7 p.m. Friday April 20. Tickets are $25 for adults, $22 for seniors and $30 for opera box seats and can be purchased online at www.prescottelkstheater.com, by calling 927-777-1370 or at the door one hour prior to the performance.

Cunningham said he plays with several of Buffett’s band members when he plays in large corporate and casino shows. However, his main guitar player for all his shows is Roger Bartlett, who is Buffett’s original guitarist, he said. When he opened in Las Vegas in 2000, Cunningham said he contacted Bartlett and Fingers Taylor, Buffett’s harmonica player, and a few others who worked with Buffett, asking if they’d be interested in performing with him when they weren’t on the road.

“It was kind of nice to have two to four, sometimes more, of his band members on stage with me, the guys that actually made the records,” he said. “Plus, it added some credibility to my shows.”

There are a number of songs Cunningham said he enjoys performing when doing the Buffett show, from slow songs like “Come Monday,” Buffett’s first mega h it in 1974” to fast songs such as “Cheeseburger in Paradise.” He also likes doing his covers of “Southern Cross” by Crosby, Stills, Nash and Young and “Brown Eyed Girl” by Van Morrison, he said.

The show doesn’t include Buffett’s obscure songs because while there may be some diehard Parrot Heads there, the crowd isn’t necessarily all Buffett fans, he said. Even after 45 years, Buffett is still asked if he’s tired of playing “Margaritaville,” Cunningham said.

“The answer for both of us is ‘absolutely not.’ That’s what people come for. When I go to a concert, I want to hear the hits,” he said. “You do not have to be a Jimmy Buffett fan to have a good time at the show. It’s just a feel good, fun show.”

Cunningham said he likes the show to be all about great music, great and fun songs, and great vocals. He’ll also be outside talking to fans afterward, he said.

Cunningham also mentioned he will be at Broadway at the Beach in Myrtle Beach, South Carolina from May 21 to Sept. 22. He can also be found online at www.jimmybuffetttributeshow.com or on Facebook at www.facebook.com/JimmyBuffettTributeShow.