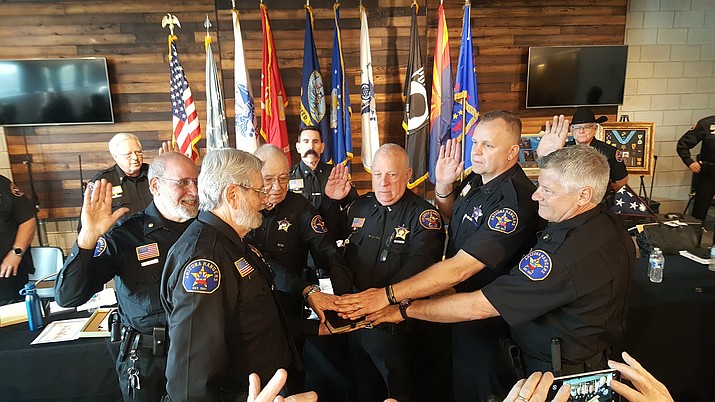 Robert A. Cressman of Prescott Valley was elected the new leader of the Arizona Rangers at the recent State meeting held in Phoenix. Col. Cressman brings considerable organizational skills and experience to the law enforcement assist and community service oriented Arizona Rangers. Cressman has served with both military and civilian law enforcement in his long public service career. During his time with the Pacso County Florida Sheriff, he set up the first K-9 unit and raised the largest amount of funding for the Sheriff’s youth program, among other duties.

For 10 years, he chaired the nonprofit National Forget-Me-Not Association for POW’s and MIA’s.

Winning the election for Ranger of the Year was Major Michael Dargus of Paulden. His volunteer efforts included working as head of the development committee raising funds and interacting with donors, upgrading the bylaws, rules and regulations and procedures and clarifying uniform requirements. He had also served as the Northern Area Commander, covering much of Arizona. All of these duties made him the perfect candidate for Ranger of the Year.

Both Rangers are members of the local Lonesome Valley Company, the largest Company in Arizona.

The Arizona Rangers were originally established by a 1901 Military Act to clean up and ready the Territory of Arizona for statehood. The Modern day Arizona Rangers were established by four original Territorial Rangers in 1957 as a nonprofit, volunteer organization now consisting of 19 Companies statewide. Their mission is to foster the history of the Rangers, support youth groups and serve in the capacity in law enforcement assists.