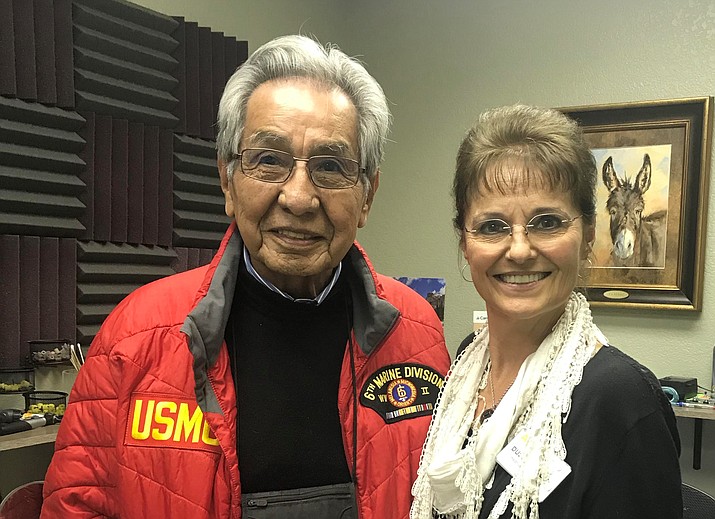 Peter MacDonald was born in Arizona in 1927 and served in the U.S. Marine Corps in World War II as a part of the elite group of Navajo Code Talkers stationed in the South Pacific.

Using the Navajo language, the code talkers communicated with one another, transmitting secret, tactical military messages in code based on their ancient, indigenous language, and the Japanese were never able to break the code. The Code talkers used military telephone or radio communication networks, and their service improved the speed of encryption of critical communications in front-line operations during World War II.

After the war, MacDonald earned an electrical engineering degree at the University of Oklahoma. Upon graduation, he worked for Hughes Aircraft Company, on the Polaris nuclear missile project. In 1963, he returned to the Navajo Nation.

Out of the 400 original Code Talkers who served in WW II, MacDonald is one of the 11 still living.

Dusty and Dee Spitler, of A2Z Hearing in Prescott, along with the Starkey Hearing Foundation, arranged for MacDonald to fly to Starkey Laboratories, located in Eden Prairie, Minnesota, to have his hearing evaluated and be fitted with the company’s advanced hearing aid technology.

Bill Austin — the CEO and founder of Starkey Hearing, a 55-year-old company and the only major hearing aid manufacturer owned and operated in the United States — fit the custom hearing aids for MacDonald.

Austin and his wife, Tani, have traveled the world to provide hearing aids to more than 1.1 million patients in more than 100 countries.

As a young man, Bill Austin realized his calling was helping people hear, creating an enduring, positive impact throughout the world. He built the organization based on his vision — So the World May Hear.

Over three decades, he has expanded the Foundation’s reach from Minnesota throughout the United States and around the world, assisted by thousands of volunteers and supporters, including Larry Fitzgerald, Alice Cooper, Elton John, Muhammad Ali, George Bush, Tony Blair and hundreds of other government leaders, professional athletes and celebrities.

Dusty Spitler said, “When it comes to giving back, Starkey walks their talk. We so appreciate Starkey’s genuine goal to help improve people’s quality of life with better hearing. Along with the best technology and customer service in the industry, Starkey has a huge heart.”

A2Z Hearing Health, LLC, provides hearing technology in the Prescott area, where Dusty and Dee Spitler have lived for more than 20 years.