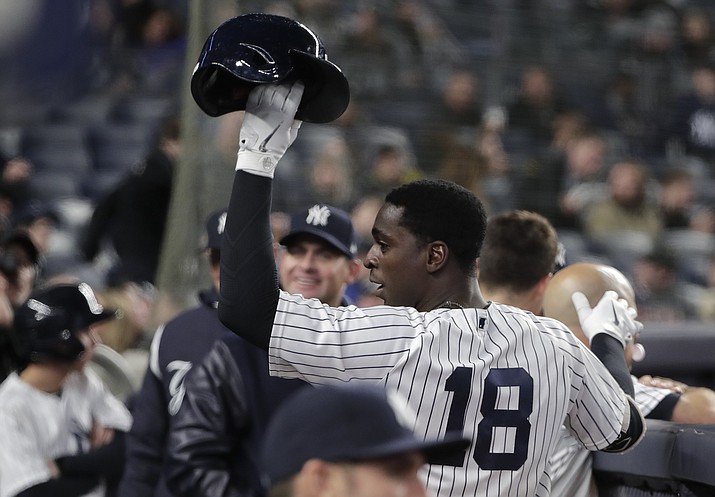 New York Yankees’ Didi Gregorius (18) raises his batting helmet to the crowd after hitting a solo home run, his second of the game, against the Miami Marlins during the seventh inning Monday, April 16, 2018, in New York. (Julie Jacobson/AP)

About the only Yankees bopper who didn’t get in on the fun was Giancarlo Stanton, who went hitless and got booed again by the hometown fans in his first game against his former team.

Aaron Judge became the fastest major leaguer to hit 60 career homers, and Gregorius finished with three RBIs. New York scored in each of the first five innings and built an 11-0 lead for Luis Severino (3-1), who allowed one hit in six scoreless innings and struck out eight.

Jeter did not attend the game, the first between the teams since the former Yankees captain became Marlins CEO last October.

Stanton went 0 for 3 with two strikeouts, a bases-loaded foulout, a walk and was hit by a pitch. The four-time All-Star, two-time NL home run champion and reigning NL MVP was dealt to the Yankees in December as part of a Jeter-directed payroll purge.

Caleb Smith (0-2), who pitched in nine games for the Yankees last year, needed 42 pitches to get the first three outs and lasted just 2 1/3 innings.

Bryce Harper hit a startling, broken-bat homer early, then grounded a key single during a six-run surge in the eighth inning that sent Washington past New York.

The Nationals rallied against five pitchers in their big burst, winning for just the fourth time in 13 games. The Mets had been off to the best start in franchise history behind the top bullpen in the majors before collapsing.

Howie Kendrick added a solo homer in the ninth.

Harper’s major league-leading eighth home run was a show of shear power and strength. His bat broke into two pieces, but the ball still flew an estimated 406 feet to right-center field.

Harper connected for a solo drive in the first inning off Jacob deGrom, who struck out 12 in 7 1/3 innings, the longest outing by a Mets pitcher this season. He left with two on, one out and a five-run lead.

A.J. Cole (1-1) got the win despite giving up Asdrubal Cabrera’s two-run homer in the seventh that made it 6-1. Ryan Madson earned his second save.

Smith bunted for a single against Martin Perez (1-2) in a four-run second inning that gave the Rays a 5-0 lead. He doubled and scored in the third on his way to a second four-hit game in eight days.

Joey Gallo became the first left-handed hitter to homer against Snell, who has made 47 career starts. Nomar Mazara added a three-run shot in the eighth.

Wilson Ramos had three hits for the Rays and drove in two runs. C.J. Cron and Daniel Robertson homered for Tampa Bay. Perez gave up seven runs and 10 hits in four innings.

Story bounced back from a miserable series in Washington by going 2 for 3 and driving in three runs, all of them coming when he sent a pitch from Steven Brault (2-1) into the bleachers in left field with one out in the fourth at frigid and blustery PNC Park to break open a close game.

Charlie Blackmon added his team-leading seventh home run of the season for Colorado. The Rockies have won five of six overall and are 8-2 in their last 10 games away from Coors Field.

Marquez (1-1) held the Pirates without a hit until a one-out triple by Francisco Cervelli in the fifth. He left after six innings, giving up two runs, two hits and two walks with six strikeouts.

Teheran (1-1) allowed one run, five hits and three walks with nine strikeouts in six innings. He began the night 3-10 with a 6.20 ERA and 21 homers allowed in 19 starts at the Braves’ second-year stadium, but Teheran kept the Phillies guessing with a tough slider.

Atlanta became the last team in the majors to record a save as closer Arodys Vizcaino ended it on Carlos Santana’s groundout.

The Reds won for just the third time in 16 games this season. Cincinnati is tied with Kansas City for the fewest wins in the majors. Joey Votto had an RBI double for his first extra-base hit of the season.