Man won’t seek Prop 123 repayment, but may seek other cash 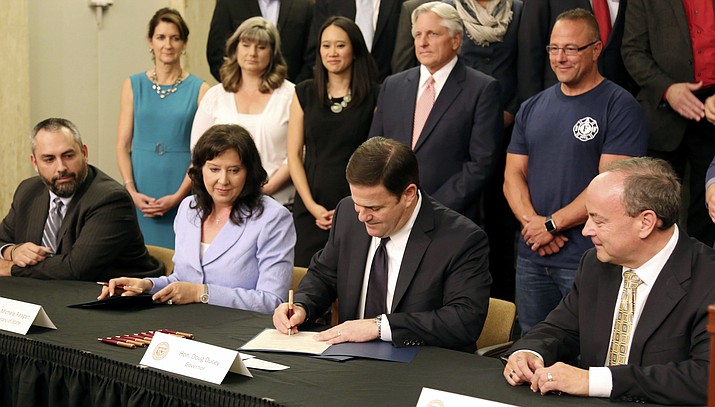 In this May 26, 2016, file photo, Arizona Gov. Doug Ducey, second from right, signs a proclamation at the state Capitol in Phoenix, certifying the results of Proposition 123 on school funding. A Phoenix man who won a federal court ruling finding Arizona distributed more than $344 million to schools since 2016 without Congressional approval won't ask for the money to be repaid because Congress finally approved the payouts last month. (Ryan Van Velzer/AP Photo)

PHOENIX — A Phoenix man who won a federal court ruling finding Arizona distributed more than $344 million to schools since 2016 without Congressional approval won’t ask for the money to be repaid because Congress finally approved the payouts last month.

But an attorney for Michael Pierce says that approval doesn’t cover a voter-approved change to state land trust distributions starting in 2012 and that the state may owe $300 million to schools.

Attorney Andrew Jacob said he plans to ask U.S. District Judge Neil Wake on Monday to consider whether the state should be ordered to pay that $300 million. He’s seeking a formal accounting of what they would have received from 2012 through 2016 under Proposition 118 because last month’s Congressional vote approving Proposition 123 didn’t cover the earlier measure.

Jacob also wants Wake to issue a formal judgment that under the federal Enabling Act, the 1912 law that created Arizona and set up the land trust, any changes to distributions require Congressional approval.

Congress created the permanent land trust mainly to fund K-12 schools, although universities and other services get some of the money, deeding more than 9 million acres (3.2 million hectares) to the state to create the fund. Any revenue from the land or sales goes into an account.

Between 1999 and 2012, the schools got the difference between a five-year fund growth average and five year inflation rates under a change approved by Congress.

In 2012, then-state Treasurer Doug Ducey championed a referendum to level those payments out to a 2 ½ percent a year. Voters approved the change, but Ducey argued that approval wasn’t needed and Congress never did.

In 2016, Ducey, now governor, pushed another change - one to boost annual payments to 6.9 percent in an effort to settle a school funding lawsuit without raising taxes.

Enter Pierce, a retired construction worker who believed the change violated the Enabling Act. Without an attorney, he sued, and Wake appointed Jacob to represent him.

Jacob is now conceding that the March congressional approval takes Proposition 123 off the table, but that it doesn’t cover Proposition 118.

He says without the unapproved level-payment schedule included in that measure, higher investment returns mean schools would have received about $300 million more between 2012 and when Proposition 123 took effect. He wants that cash paid to schools.