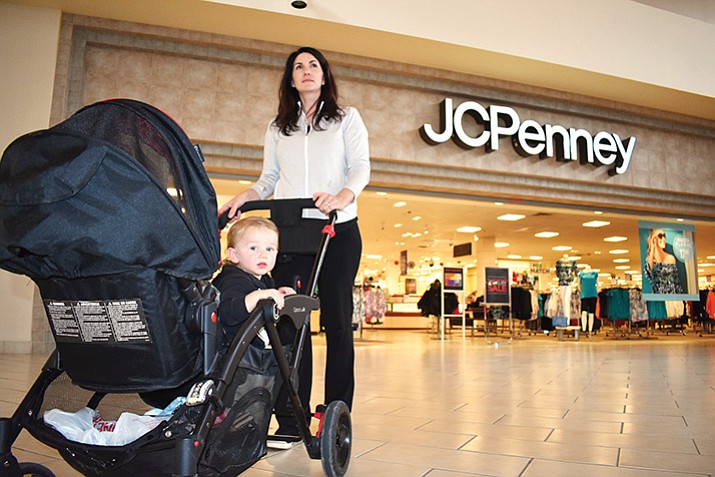 In this Courier file photo, 17-month-old Arnold Masters peeks out of his stroller as his mom, Prescott Valley resident Alexandria Masters, leaves the JCPenney store in the Gateway Mall. The Prescott JCPenney store was honored as a top performing store with its company’s Founder’s Award at a special ceremony held April 5, in Grapevine, Texas. (Richard Haddad/WNI file photo)

The JCPenney store at Prescott’s Gateway Mall was honored as a top performing store with its company’s Founder’s Award at a special ceremony held Thursday, April 5, in Grapevine, Texas.

With more than 870 JCPenney stores across the country, general manager Andrew Thornton was one of over 90 store leaders recognized for outstanding performance in 2017, according to a news release.

“I’m proud of our dedicated associates at JCPenney in the Prescott Gateway Mall who received this special recognition,” said Tony Hurst, senior vice president of stores. “The Founder’s Award is the company’s highest honor, recognizing top-performing leaders that significantly contribute to the success of JCPenney and provide customers with an unmatched shopping experience. We look forward to another exceptional year serving the customers in Prescott.”

The company’s Founder’s Award is presented to general and district managers for leading teams that deliver strong results in the areas of financial performance, customer and client service and business expertise.

Banks are expected to be major beneficiaries of the tax overhaul, which sharply lowered corporate tax rates. Comparing each of the effective tax rates from last year to this year, the three Wall Street banks that reported earnings Friday appeared to have saved roughly $1.6 billion altogether.

The first-quarter earnings season will give investors and the public their first good look into how President Trump’s tax law is impacting Corporate America. Publicly traded banks are the first major industry to report their results each quarter.

Net income at JPMorgan Chase, the nation’s largest bank by assets and deposits, rose 35 percent to $8.71 billion. The result was primarily driven by two factors: higher interest rates, which have allowed banks such as JPMorgan to charge more for customers to borrow, and the lower corporate tax rate.

However, JPMorgan had to set aside more money to cover bad loans in its consumer bank, where delinquencies have been steadily edging higher. JPMorgan shares fell 2.7 percent, while shares of Wells Fargo slipped 3.4 percent and Citigroup shares dropped 1.6 percent.

JPMorgan Chief Executive Officer Jamie Dimon has been a big promoter of the tax overhaul, saying it would be good for businesses as well as average Americans. Soon after President Donald Trump signed the law into place, the bank announced higher salaries for most of its retail bank employees, and said it would open branches in a handful of new markets.

Other bank executives were just as optimistic when speaking about the tax law’s impact. Citigroup Chief Financial Officer John Gerspach told reporters Friday that businesses had only begun taking advantage of the changes. “I think the best is yet to come,” he said.

Rising interest rates helped JPMorgan Chase and Citigroup, but not Wells Fargo, which continues to struggle under the weight of several scandals and investigations. Wells disclosed as part of its earnings that they may have to pay as much as $1 billion to federal regulators to settle investigations being conducted by financial regulatory agencies.

The Federal Reserve has been steadily raising interest rates for more than two years.

Yavapai College has received the Government Finance Officers Association’s (GFOA) Certificate of Achievement for Excellence in Financial Reporting for the 18th consecutive year.

“The Certificate of Achievement is the highest form of recognition in governmental accounting and financial reporting,” said Michele Mark Levine, the GFOA’s Technical Center Services Director. “Its attainment represents a significant accomplishment by a government and its management.”

The Certificate of Achievement was awarded to Yavapai College based upon the comprehensive annual financial report the college presented for the fiscal year ended 2017.

It’s a set of financial statements for a state, municipality or other governmental entity that comply with the accounting requirements established by the Governmental Accounting Standards Board, said Frank D’Angelo, controller for Yavapai College. It must be audited by an independent auditor using generally accepted government auditing standards, he added.

“The (report) has been judged by an impartial panel to meet the high standards of the program, which includes demonstrating a constructive ‘full spirit of disclosure’ to clearly communicate its financial story and motivate potential users and user groups to read (it),” Levine said.

“This sort of prestigious recognition underscores how seriously the college regards the responsibility of accurate and transparent financial reporting,” YC Vice President of Finance and Administration, Dr. Clint Ewell, said. “We have a great team of people who ensure that we’re using our resources optimally for our students as well as our taxpayers.”

Heinz asks if America is ready for Mayochup

PITTSBURGH (AP) — What do you get when you combine mayonnaise and ketchup?

A debate on Twitter after Heinz on Thursday launched a poll asking Americans if they’d like a pre-made combination of the condiments called Mayochup. Heinz will bring the product, which is currently available in parts of the Middle East, to the United States if the poll closes on Sunday with 500,000 votes in its favor.

Some respondents like the idea. But others say it’s been around as Fry Sauce in Utah and Salsa Rosada in Latin America. Then there are those who say the combo is just short of relish from becoming a salad dressing or special sauce.

The debate also includes the name Mayochup. Heinz says it’s committed to putting the final name up for a vote.

FLAGSTAFF (AP) — An investment firm tasked with finding a new owner for an Arizona coal plant is focused mostly on an unnamed potential investor, but critics of the plant say talks to keep it open are a “wasteful distraction” that hinders future economic prospects for the Navajo Nation.

The Navajo Generating Station near Page is set to close in 2019 unless someone steps in to buy it.

A sale is considered a longshot as utilities increasingly move away from coal-fired power in favor of renewable energy sources and cheaper natural gas.

No new coal-fired power plants are being built in the United States, and 470 generating units have been retired since 2010. Nearly 160 more are scheduled to go offline through 2025, according to the environmental group CoalSwarm.

The Navajo plant is one of the biggest in the West and has a single coal supplier, Peabody Energy. The company has launched a campaign to save the 2,250-megawatt plant — along with its own mine — and hired Lazard Freres to lead the search for a new buyer.

Officials did not identify the potential investor but said it’s a reputable company that operates power plants and has met with key players.