Column: Take care regulating what is said in public places 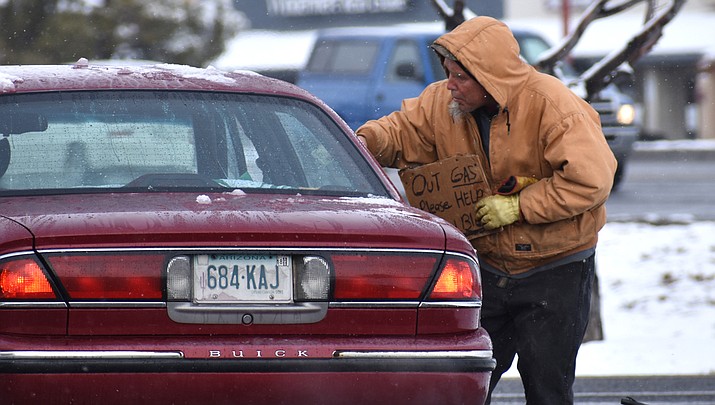 A local man solicits help from passing drivers during a snowy day in 2018. The City of Prescott will soon begin installing signs at busy Prescott corners, urging passers-by not to give to panhandlers. As an alternative, the signs will suggest donating to a city-led effort to collect money toward helping the homeless. (Richard Haddad/WNI)

As you have seen in The Daily Courier this week, the City of Prescott’s continuing plans to manage social interactions in the city’s attractive downtown district will soon include installation of signs to warn the public away from making impromptu contributions to other members of the public.

This measure follows the city’s 2013 ordinance that banned panhandling within 15 feet of a bank or an ATM.

Of course, legal experts — like a local judge and the American Civil Liberties Union — have cautioned city leaders, including those in Prescott, that have undertaken similar measures, concerning some of the rights guaranteed by the U.S. Constitution, such as freedom of association and freedom of speech. Such rights are especially protected in public places, which, in some cases — like city sidewalks and parks — the U.S. Supreme Court has defined as “a government-owned property that is open to public expression and assembly.”

It’s not unusual for these constitutional rights to conflict with the widespread trend in recent years toward redevelopment of downtown neighborhoods, a process called, for lack of any better word, gentrification.

One example, of many such examples of revitalization in downtown Prescott, can be found in the Courier’s report earlier this month of redevelopment of a downtown building on Cortez Street into condominiums intended for sale.

While such trendy, mixed-use redevelopments bring much that is appealing for downtown, this moment of transition in Prescott seems like a good time to remember some of the homeless beggars who we may have met along our way, like the one who had no beauty or majesty to attract us to him, nothing in his appearance that we should desire him.

He was despised and rejected, a man of suffering and familiar with pain, and we held him in low esteem. And even though foxes have dens and birds have nests, he had no place to lay his head.

His followers endured prison sentences, including in the United States, to, for one thing, expand the legal rights that are uniquely American to speak in public places. Their example was that of another itinerant, the Apostle Paul, whose public speeches even created riots.

Discomfort over what might be said in public places is the reason that preaching the Gospel is banned as “hate speech” in some parts of the European Union.

Keeping this history in mind, which is very much present in the world today, especially, proudly, in the United States, let’s be gentle in any effort to govern what might be said to whom on Prescott’s city sidewalks and parks.