Prescott’s program to discourage panhandling set to begin this spring 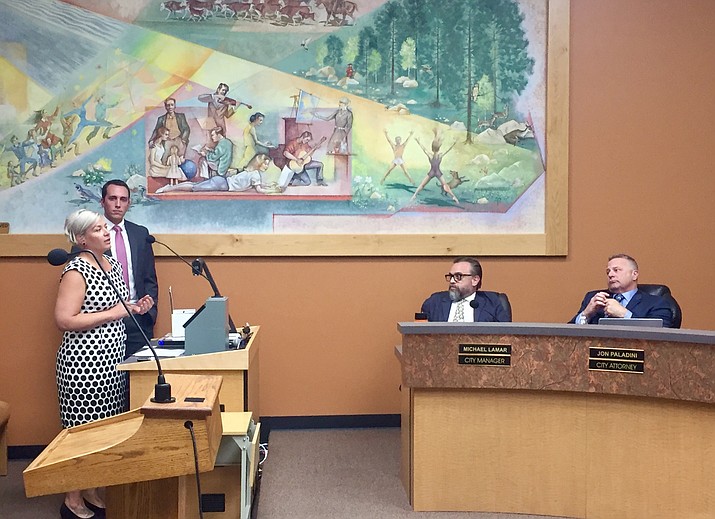 Coalition for Compassion and Justice Executive Director Jessi Hans, left, answers a question about homelessness in the community, as Prescott Special Projects and Legislative Coordinator Tyler Goodman looks on. The April 10 discussion focused on the city’s plans to better manage the homelessness issue. (Cindy Barks/Courier)

Within weeks, signs will begin appearing at busy Prescott corners urging passers-by not to give to panhandlers.

As an alternative, the signs will suggest donating to a city-led effort to collect money toward helping the homeless.

The signs will be just one of the steps in a multi-pronged “Change for the Better” approach that the Prescott City Council supported Tuesday, April 10.

Among the other steps:

• Parking-meter-style collection meters that will allow people to donate their spare change to the effort.

• A program to put homeless people to work helping to maintain city rights-of-way and facilities.

• “Defensive architecture,” such as armrests on park benches to discourage people from lying down.

• Paid ambassadors to walk the downtown streets to provide information and security.

While some in the audience voiced concerns, council members were mostly supportive.

After the meeting, Mayor Greg Mengarelli said the support from the council provided the go-ahead for city staff to get the program underway. “We’re going to move forward,” he said.

City Manager Michael Lamar said he expects the “Change for the Better” steps to begin appearing on city streets within about three weeks.

Tyler Goodman, special projects and legislative coordinator for the city, said that while some of the program’s costs have yet to be determined, the known costs total about $16,400.

That encompasses: $5,000 for the purchase, refurbishment, and installation of the collection meters, as well as the sign fabrication and installation; $1,900 on boxes, posters, flyers, and graphic design; $9,500 in city bed tax money for the work program, a joint project with the Coalition for Compassion and Justice.

The cost of the ambassador program will be determined largely by proposals that the city receives on the service. Goodman expects the request for proposals (RFP) on that program to be released to the public by next week.

In response to a question from Councilwoman Alexa Scholl about how the city would gauge the results of the program, Lamar said the level of panhandling would be a major indicator.

“I would hope we would see a meaningful reduction in the number of people who are panhandling,” Lamar said.

Mengarelli led off the discussion by noting that he had heard a number of concerns from residents, including from some who have been intimidated by panhandlers.

Mengarelli stressed, however, that the “Change for the Better” program “is not just about cleaning up our streets; it’s also (a matter of) ‘how do we help?’”

Councilman Phil Goode said he sees the program as “a way to support the legitimate people who have real needs.” But for those who are taking advantage of the givers, Goode said the program “would turn off the spigot.”

That led Councilman Steve Sischka to ask for a breakdown of those who are “honest-to-goodness homeless, and those who are in the business of panhandling.”

Coalition for Compassion and Justice Executive Director Jessi Hans responded that while a statistical breakdown is not available, she added, “I don’t think people are out there making a fantastic wage. I think that is a misconception.”

Council members heard a variety of views from the audience – ranging from concerns about a lack of compassion for the homeless, to views that panhandling is bad for business.

“The council appears to be trying to circumvent the constitutional protections,” Hess said. He called the signs that would be located at popular panhandling spots “demeaning” to those who are asking for assistance.

And of the armrests on park benches, Hess said. “Armrests to keep someone who doesn’t have any place to sleep from sleeping – that doesn’t sound very compassionate.”

But local property owner and businesswoman Connie Cantelme commended the council for taking steps to try to curtail the impacts of panhandling.

“Thank you from making an attempt to help the business owners,” Cantelme said.

While acknowledging the constitutional right to panhandle, Cantelme said many of the local homeless people abuse that right by becoming aggressive.

“Yes, they have rights, but they lose those rights when they become aggressive panhandlers,” she said, adding, “Business owners have rights too.”

The city will conduct two public meetings on April 18 – at 8 a.m. and 4 p.m. – to discuss implementation of the program with business owners, organizations, and churches. The meetings will take place at Prescott City Hall, 201 S. Cortez St.