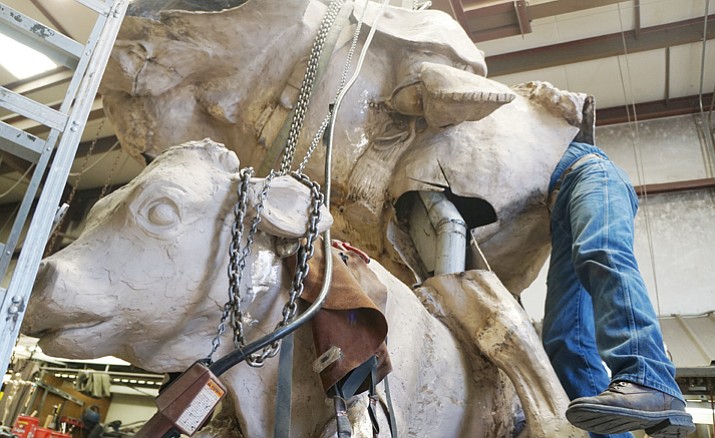 Work on the “Cowboy in a Storm” statue that will be installed at the traffic roundabout in front of the Phippen Museum is nearly complete, says local sculptor Ed Reilly. Bronzesmith Fine Art Foundry & Gallery employee Kevin Miner was recently at work welding together the dozens of bronze pieces cast for the sculpture. (Cindy Barks/Courier) 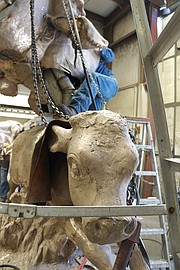 The statue “Cowboy in a Storm” will be installed at the traffic roundabout in front of the Phippen Museum in Prescott, Arizona. (Cindy Barks/Courier)

With his arms and head securely in place, all the cowboy needs now is his lasso.

And that will be coming soon.

Prescott Valley sculptor Ed Reilly says his Bronzesmith shop is in the “home stretch” of its months-long project to create a 14-foot-high replica of renowned western artist George Phippen’s “Cowboy in a Storm.”

Next up, he said, will be the attachment of the cowboy’s rope, and the welding of the horse’s body to the base.

The statue is expected to be complete by the end of the month, Reilly said – ready to be installed at the new roundabout on Highway 89 in front of the Phippen Museum.

The roundabout/highway widening project is also wrapping up, says the city’s Construction Services Administrator Tim Sherwood, and should be done by about mid-May.

The installation of the statue is expected to occur sometime after Memorial Day, although an exact date has yet to be determined, Sherwood said.

The “Cowboy in a Storm” miniature bronze was the last work of Skull Valley western sculptor and painter George Phippen, before his death in 1966.

The piece depicts a cowboy at work in the saddle, arm thrown back, his horse straddling a calf.

With its all-around action, “Cowboy in a Storm” was seen as a natural choice when it came time to pick artwork for the high profile roundabout.

A view of the piece from one side shows the cowboy’s determined expression, while another angle shows the wide-eyed face of the calf, and still another shows the acrobatics of the horse.

The Phippen Museum says the sculpture “has all the trademarks of (Phippen’s) extraordinary western artwork: It’s accurate, funny and, just like George, larger than life.”

In a news release on the soon-to-be-installed sculpture, the museum added: “Ultimately, it was George’s keen sense of humor and lighthearted nature that endeared him to others.”

Phippen, who was the inspiration for the western-art-focused Phippen Museum, grew up on farms in Iowa and Kansas, and his son Loren said his father was always drawn to ranching scenes of horses, cattle, and southwestern landscapes.

George Phippen brought his personality to his artwork, “transcending the Western art genre and illustrating a basic commonality among men,” the museum says. His “ability to share humor in an otherwise bad situation” – was achieved in “Cowboy in a Storm,” it adds.

Prescott Valley sculptor Ed Reilly says his Bronzesmith shop is in the “home stretch” of its months-long project to create a 14-foot-high replica of renowned western artist George Phippen’s “Cowboy in a Storm.” (Cindy Barks/Courier)

The public got its first look at the sculpture and the Bronzesmith’s process in October 2017 during an open house that unveiled the clay-over-foam rendition of the piece.

The set the stage for the bronze casting, which was done in 65 separate pieces.

Since then, Bronzesmith has been at work welding the pieces together. In early April, Bronzesmith employee Kevin Miner was at work on the horse’s torso, doing welding work from the inside.

Prior to the installation at the roundabout, the public will have a chance to get a close-up look at the finished sculpture. Reilly said he plans to transport the piece to the Yavapai County Courthouse Plaza in time for the Phippen Museum’s annual Western Art Show & Sale, May 26 through 28.

“We’ll be taking it down to the courthouse on May 25 for a sneak peek,” Reilly said.

The Phippen Museum says the Phippen family, along with museum staff, trustees and local dignitaries, will be on hand at 11 a.m., Saturday, May 26, for the special unveiling ceremony.

“The public is also welcome and encouraged to attend this heartfelt tribute to George Phippen and his inspiring legacy and incredible work,” the news release states.

After that, the sculpture will be transported to the Phippen Museum. The installation, which will occur sometime after the Memorial Day weekend, will require a crane, Reilly said.

Sherwood said Tuesday that the plans for the structural drawing for the statue’s foundation has now been completed and reviewed.

The project, which got underway in the summer of 2017, involves: widening about a mile of highway to four lanes (running just south of the Highway 89A interchange to just south of the Phippen Museum); building the roundabout; a new trailhead at the Constellation Trail; a new box culvert under the highway; and water- and sewer-line work.

Sherwood said the final three-inch layer of asphalt is scheduled to be applied during nighttime hours from April 22 to 27. Guardrail, striping, and signage work will continue for the next several weeks. Sherwood expects the entire project to be done by mid-May.

The Phippen Museum news release notes that the statue project has been supported by the local art community, including the Prescott Area Art Trust; Ed and Kathy Reilly of Bronzesmith Fine Art Foundry; sculptor Debbie Gessner; with donations from the Harold James Family Trust, Jim Chamberlain of Sun State Builders, and the City of Prescott.