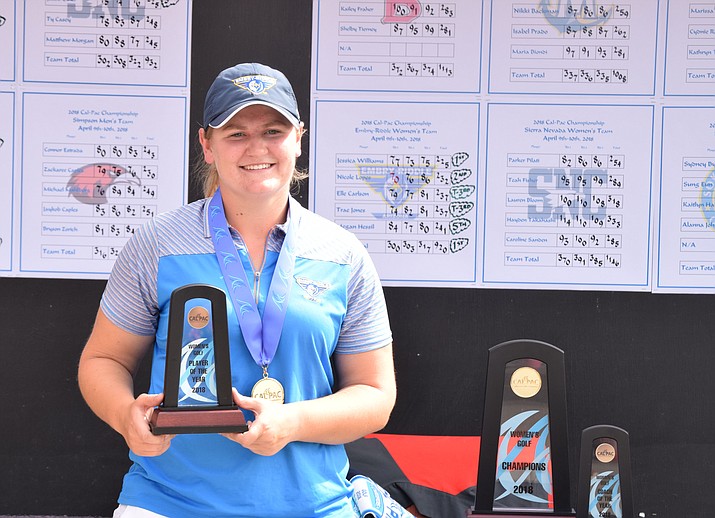 Embry-Riddle's Jessica Williams holds her trophy after claiming the individual title for the 2018 Cal-Pac Golf Championships on Tuesday, April 10, 2018, in Mesa. Williams fired a 3-over par 75 Tuesday, surpassing teammate Nicole Lopes for the title. (Terry Licht/Courtesy)

Led by Williams, Embry-Riddle claims its fourth Cal-Pac title in school history, with all five golfers finishing in the top five after the three-round, two-day event at Mesa Country Club.

Williams, a sophomore who finished runner up at the NAIA Women’s Golf National Championships a year ago, is the fifth straight Embry-Riddle player to claim a Cal-Pac title after Lauren Kruszewski held the trophy from 2014-2017.

“It feels really good to put solid rounds together,” Williams said via email Tuesday night. “We are peaking at the championship time right now when we need to.”

Williams said all her hard work is paying off.

“I’m looking forward right now to catching up on school and prepare for nationals in Florida,” Williams said.

Teammate Nicole Lopes entered play Tuesday morning atop the leaderboard with a 2-over par 146, but shot a disappointing 86 (+14) and finished second overall.

“With three wins in a row, and now qualifying for nationals? How exciting for us to have all five players on the All Cal-Pac team,” Haddow said.

Trailing Marymount College for the Cal-Pac lead by 22 strokes, Embry-Riddle stormed back and almost completed one of the greatest comebacks in NAIA golf history, turning in a 1-under par 287 to finish second overall Tuesday.

Marymount held on after almost completely collapsing with a 19-over par 307 performance. They claimed the team title with an 895 (+31), while the Eagles finished with an 897 (+33).

Marymount’s Michael Padilla finishes first overall with a 1-under 215.

“The determination that our men’s team displayed to come back with an exceptional third round to put us back into contention for the Cal-Pac title [was impressive],” men’s head coach Mike Haddow said.

The 2018 NAIA Golf National Championships are scheduled for May 23-25 at PGA National Resort in Palm Beach, Florida. Tee times have yet to be determined.