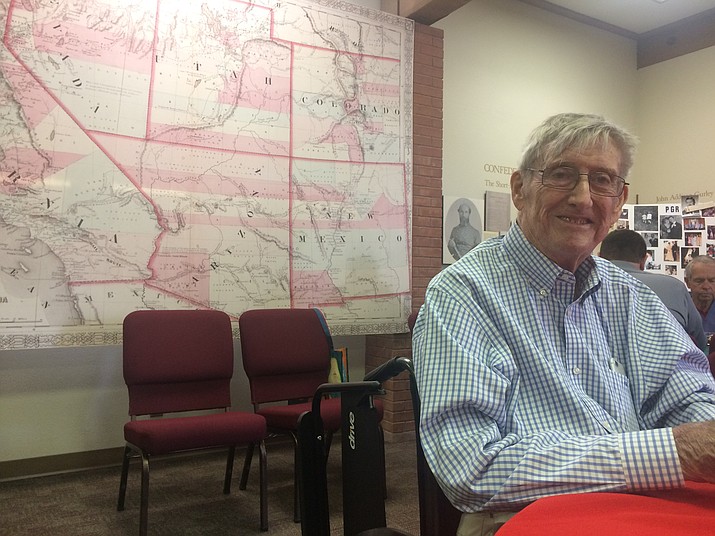 Given his love of Arizona history, the museum was the perfect place to hold the birthday celebration, said daughter Delia Heck.

“My dad’s passion has always been Arizona history. When we thought about where we could have it, the first thing that came to my mind was Sharlot Hall Museum,” Heck said. “It’s a beautiful location and it embodies his love of the state of Arizona. It was a place we spent a lot of time as kids growing up. Whenever somebody came to town, we always brought people to visit.”

Rosenblatt said he has such a strong affection for the museum, having spent a lot of time there, and also has a family connection to it. His sister, Dora Heap, was the first paid director of the museum, he said. Heap served from 1965 to 1972.

With so much connection to the museum, celebrating his 90th birthday there was like coming full, Rosenblatt said. He was born in Prescott as well, he said.

Rosenblatt spent a number of years serving as a judge following his graduation from the University of Arizona in 1958 and the university’s College of Law in 1963. According to the Federal Judicial Center, he was assistant attorney general for the State of Arizona from 1963 to 1966, administrative assistant to United States Representative Sam Steiger from 1967 to 1973 and was in private practice in Prescott from 1971 to 1973.

He served as a presiding judge for the Superior Court of Arizona, Yavapai County, Division One from 1973 to 1984 and was appointed by President Ronald Reagan as a federal judge for the United States District Court for the District of Arizona from 1984 to 2003, when he assumed senior status.

Looking back at his career, Rosenblatt said he was lucky to have had it, but also mentioned it was very challenging. Every case before him was important to whoever was a part of it, he said.

“You have to remember that every case should be treated with the same concern and objective treatment as the next case,” Rosenblatt said. “Even though one case may have a whole bunch of lawyers and a whole bunch of people and the next case is only one person, to that person it’s the most important thing.”

Paul Rosenblatt said he told Veil that he is older than the Sharlot Hall Museum by two months. The museum is celebrating its own 90th anniversary on Monday, June 11, Veil said, commenting 1928 was when Sharlot Hall opened it up to the public.