Proposal for flights to LAX, Sky Harbor comes out on top with Prescott Airport Advisory group 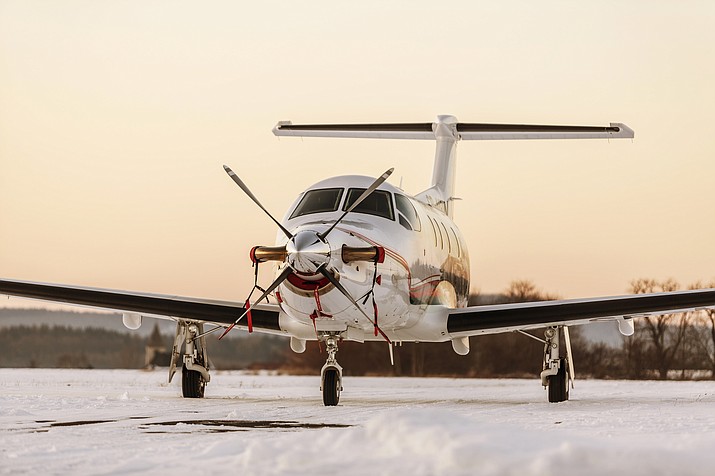 A Pilatus PC-12 airplane that could serve Prescott Municipal Airport in the near future. (Stock/Courier)

Prescott air passengers could have the option soon of daily roundtrip flights to Los Angeles and Phoenix, aboard an eight-seat aircraft described as “the Porsche” of airplanes.

The committee’s action was a recommendation only, and the final decision will be up to the U.S. Department of Transportation, which administers the Essential Air Service (EAS) subsidy program.

The Prescott City Council will also weigh in on the matter at its 3 p.m. Tuesday, April 10, voting meeting. The air-service contract was added to the council’s agenda late Friday afternoon.

The Prescott Municipal Airport has been without commercial air service since March 26, when the former carrier, Great Lakes Airlines, suspended its service. That set off an expedited effort to find a replacement – a process that generated three bids.

In order to get things moving quickly, the Prescott Airport Advisory Committee scheduled a special meeting for Saturday to review the three proposals.

Prescott Airport Director Robin Sobotta led off the meeting by outlining the details of the proposals from: Boutique Air; Advanced Air; and Mokulele Airlines. All proposed using small aircraft with eight or nine seats. Several Airport Advisory Committee members termed the choice of Boutique’s plan to fly 36 weekly roundtrips to LAX and Phoenix “a no-brainer.”

Each of the other proposals came with details that committee members viewed as deterrents.

Advanced Air, for instance, proposed flying into the LA-area Hawthorne Airport, with limousine service to LAX, while Mokulele Airlines proposed using Cessna Caravans – non-pressurized airplanes that committee members maintained would not be comfortable for passengers.

And Boutique’s other options, which involved using KingAir 350 airplanes, came with annual federal-subsidy price tags in the $5.7 million to $6.8 million range. Sobotta pointed out that the average EAS subsidy is in the $2.5 million range, and Great Lakes’ subsidy totaled about $2.8 million. DOT likely “would be disinclined” to choose a subsidy in the $5 to $6 million range, she added.

Boutique Air’s proposal for 36 weekly round trips to LAX and Phoenix on Pilatus PC-12s would come with a $4.4 million federal subsidy, which Sobotta said “is within the range of possibility.”

“They’re a tremendous aircraft,” he said of the single-engine planes. “They are really fast and quiet. They’re the Porsche of aircraft.”

Still, some questions arose about the proposing airlines’ ability to keep their airplanes staffed and maintained. Audience member John Johnson, a 30-year airline pilot from Prescott Valley, brought up the issue of reliability, asking whether the ongoing pilot shortage would be a factor for the three proposing airlines, all of which he said are considered entry-level airlines for pilots.

“My biggest concern is that every airline out there is looking for pilots,” he said.

Because of the Great Lakes’ issues with late and canceled flights, Sobotta said she has emphasized reliability with each of the airline bidders. She posed the pilot question to the three airlines, and “Each airline responded, ‘yes we do have enough pilots,’” she said.

Advisory Committee Member Kathy DeFreitas, who worked as the station manager for Great Lakes, said the pilot shortage had been a major issue for the previous airline. “That was our challenge – getting the captains to stay,” she said.

Sobotta explained that the current round of proposals is for an interim EAS contract, which would run about a year. Bids for the permanent contract are due July 2. If all goes as anticipated, the interim carrier could be offering flights as soon as early-to-mid-May.