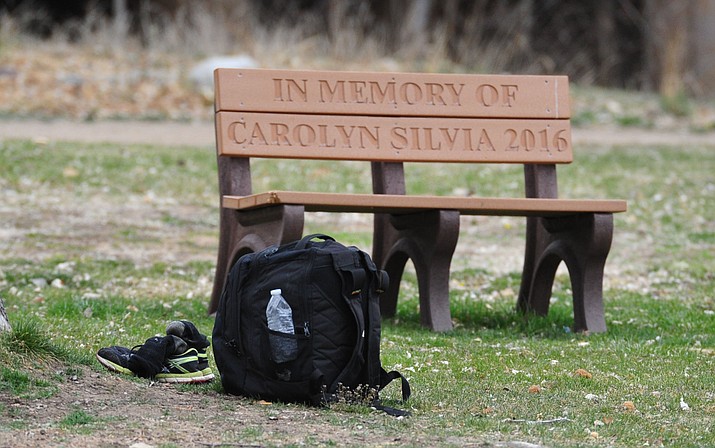 A bench often used by the homeless sits empty for now March 22, 2018, at Granite Creek Park in Prescott. (Les Stukenberg/Courier)

Panhandlers on the streets of Prescott could soon face a number of roadblocks to their efforts to collect money.

For instance: Prescott corners that tend to attract people asking for assistance could begin sporting official signs discouraging the practice of giving to panhandlers.

And nearby, collection meters could be installed that would urge people to donate their spare change toward collective efforts to help the homeless, rather than giving directly to panhandlers.

Those are just two of the steps the City of Prescott is contemplating to “better manage” the community’s homeless issue.

During a 1 p.m. study session on Tuesday, April 10, the Prescott City Council will hear a presentation on “Change for the Better” – a city initiative to deal with the homeless issue. The meeting will take place at Prescott City Hall, 201 S. Cortez St.

City officials point out that a stakeholders group has been meeting for weeks to discuss ideas for dealing with a perceived increase in panhandlers and idle homeless people.

“Hopefully, it’s a comprehensive, multi-faceted approach to managing panhandling and homeless in the community better,” City Manager Michael Lamar said of the proposal.

The ultimate decision on which, if any, of the measures that will be adopted lies with the Prescott City Council, Lamar said.

Among the program’s possible elements:

“I’ve been in locations where they’ve taken old parking meters that say, ‘please feed this meter, and the proceeds will be distributed through grants to social service agencies that help the homeless,’” Lamar said.

Another idea involves distributing boxes at businesses, churches, and other locations around the community – also urging donations instead of giving to panhandlers.

At the end of each year, the city would then conduct a grant process to distribute the collected money to social service agencies that help the homeless, Lamar said.

• Defensive architecture – The city proposes making minor changes to its park benches and landscaped planters that would make it less convenient for panhandlers.

“If you have a planter that really is to be for the public to enjoy, and you have a guy sitting there all day, maybe you put a wrought-iron fence around it,” Lamar said.

The city also is considering installing arm rests in the middle of its park benches to discourage people from using the benches for sleeping.

• Work program by the Coalition for Compassion & Justice – The city would contribute $9,500 toward a program that would put homeless people to work helping to clean up city streets, parks, and other facilities.

• Ambassador program – The city would seek proposals for downtown security and ambassador services. The ambassadors would be expected to provide information to visitors, and would serve as “the eyes and ears on the street” to report crime and other problems, according to a city memo.

Lamar described the “Change for the Better” initiative as “a little bit of a carrot and a stick. You try to help these people if they want to be helped, but also make downtown more comfortable for people who might be slightly intimidated by the homeless population.”

NOT A VIABLE OPTION

But Daniel Mattson, a local homeless advocate, maintains there are better ways to deal with the issue.

“The homeless are going to have to be somewhere,” he said. Rather than taking measures that could end up spoiling the downtown for the general public as well as the homeless population, Mattson suggests “moving (the homeless people) away from the downtown to places that are less objectionable.”

He also voices concerns about the donation meters that would discourage people from giving to panhandlers.

Along with this week’s presentation to the council, the city also will conduct two meetings on April 18 – one at 8 a.m., and another at 4 p.m. The meetings will take place at Prescott City Hall, 201 S. Cortez St.

“We would like to invite local service providers, businesses, and the faith-based community to attend one of these meetings,” a news release from the city stated.

It adds: “You will receive a brief overview of the initiative, participate in a short Q&A, and if desired receive a small donation container to place at your storefront, places of worship, or other appropriate locations.”