Friday Catchall: Don’t get burned, hang up; and what about teachers?! 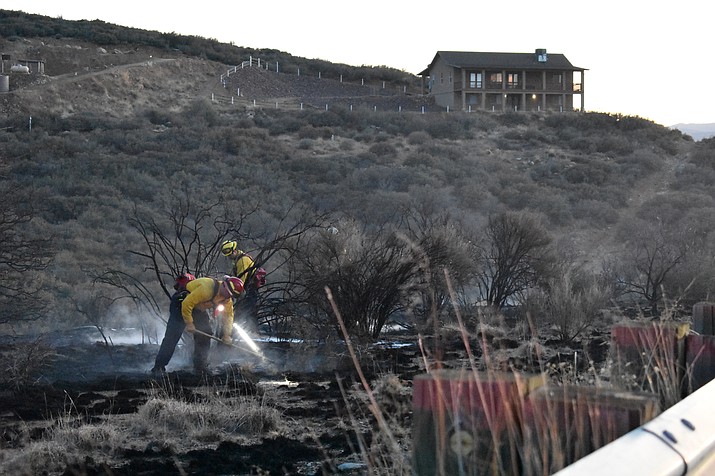 Firefighters mop up a wildland fire Wednesday along Highway 169 that was possibly started by a vehicle dragging chains. (Richard Haddad/WNI)

• WILDFIRE — It is a simple concept, one for which I cannot count how many times I’ve written about it in this space: be careful out there, we live in wildfire country.

On Wednesday evening, April 4, authorities were jumping quickly to tame a fire along Highway 169 in Dewey, between milemarkers 4 and 5. Law enforcement closed the highway and residents were told to prepare to evacuate.

State troopers searched without success for a vehicle that may have been dragging chains, such as on a trailer, throwing sparks. The highway was reopened a short time later, at about 7 p.m. No injuries, no property damage, no evacuations.

It reminds me of the time years ago when firefighters were battling small wildfires along Highway 69 one afternoon between Prescott Valley and Prescott. A vehicle dragging its chains — sparks here, sparks there — started fires along the way. It has also happened on Interstate 17 and along Highway 89.

Folks, we do not live in a hurricane area (Florida and the Gulf Coast), and we don’t have to fret about sharks (beaches, practically anywhere). However, in Arizona we have recorded tornadoes (near Flagstaff) and funnel clouds (in the Quad Cities); an earthquake fault exists north and east of Chino Valley (a tremblor years ago shook a few nerves); and we must beware of wild animals (mountain lions, rabid critters, and snakes).

But — and it is a BIG but — our most common, prevalent and dangerous challenge, every year, is fire. We do not live in the desert (they have fires too, though), but our dry winds can take a spark — from chains, a tossed cigarette, even a hot vehicle’s undercarriage, chainsaws, mower blades, etc. — and whip up a deadly conflagration.

It is honorable, and kind of cool, to hear about the Highway 169 residents who watered their properties and homes using garden hoses.

Still, we must all be vigilant to NOT cause fires … to think before we act, work, or toss anything. It is for your safety - and mine and that of everyone else.

Finally, if you are told to evacuate, I say that is not the time to pack (or water the yard) — be prepared, have go-bags ready, important papers quickly accessible, medicines, a little food, and so on, ready to grab, load and go. The list is long, click on these links for suggestions we have published, including creating defensible space and signing up for the Sheriff's Office alerts.

And, listen to the authorities. My family and I were evacuated in 2013 for the Doce Fire (another column I wrote on this topic; click here for a photo). When they say go, you need to go.

Stay safe out there, everyone!

• SCAMS — Please re-read the fire threat section above, this time replacing the word(s) fire or wildfire with “phone scams.” OK, that doesn’t really work — but consider that very often we receive calls at the newspaper about scams happening (IRS, APS, grandson jailed, …) and people keep falling for them.

Do not, I repeat do NOT give your personal information over the phone. If it sounds good, or too good to be true, it is. Hang up and call the police.

• TEACHERS — I’ve got an irony for you: remember when Gov. Doug Ducey said he gave raises to his staffers, claiming he has to pay them higher salaries to keep good people? A colleague and friend of mine reminded me of this: why does that not count for our teachers? The Arizona education deficit still exists, despite what lawmakers pledge in fixes.

Training, getting into a groove, coming into your own as an employee and being creative, being proactive … the list is long why turnover hurts (our children).

Let’s keep our teachers where they are. Are you listening, Governor? Lawmakers?

• PICK OF THE WEEK — (Proving there’s always something good to do in the Prescott area that’s cheap or free): The 70th annual Kiwanis Auction concludes today, April 6. They raise money for the children of our community this way. Tonight’s auction is live at prescottkiwanisauction.com, on cable Channel 64 or dCourier.com, from 7 to 10 p.m. Here’s the Pick of the Week: At noon Saturday, April 7, any items that were sold but not picked up will be sold at a live auction inside the Grace Sparkes Activity Center, 824 E. Gurley St., in Prescott.

Community Editor Tim Wiederaenders is the senior editor for The Daily Courier and Prescott Newspapers, Inc. Follow him on Twitter @TWieds_editor. Reach him at 928-445-3333, ext. 2032, or twieds@prescottaz.com.