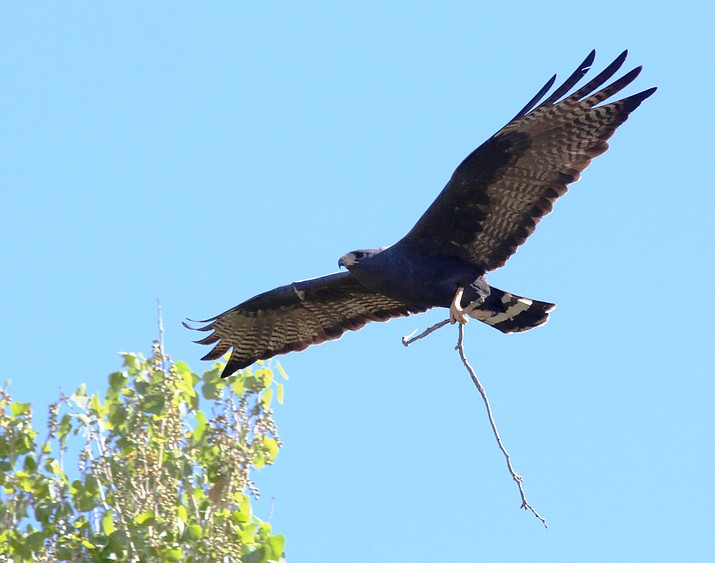 This past week I led a Jay’s Bird Barn-sponsored bird walk to one of my favorite birding destinations in Arizona — Date Creek Ranch. For 10 years, I led bird walks to this location as part of a NAU Road Scholar birding program.

I no longer lead Road Scholar programs for Northern Arizona University, but I still enjoy the places I used to take out-of-town guests to. In addition to Date Creek, we stopped in Skull Valley, Peeples Valley, Yarnell and Congress. Each location provided us with an opportunity to see different bird species.

Overall, we had a really good day, even though we struck out on some birds that I just knew we would see, such as Harris’ hawk. My goal was to have a big raptor day, and in the end it turned out to be a so-so raptor day. I spent a considerable amount of time scanning the skies for Harris hawks, and for Ferruginous hawks in Skull Valley, but didn’t see either.

I was also hoping for a good variety of falcons. The route we took, and the locations we visited, could have resulted in four different falcon species for the day — peregrine, prairie, merlin and American Kestrel. However, we came up with only a Kestrel.

In spite of a few ‘gaps’ in our bird list, we really did have a good day. When we tallied our list, we came up with a list of 62 species observed. We heard or saw evidence of several more species, but didn’t add them to our tally.

For example, as we walked in the creek we saw evidence indicating there were wild turkeys in the area. We saw lines in the sand created by strutting males drag their wings as they display for hens, and large foot prints, as well. But we never saw any. We also heard yellow warblers and hermit thrushes on more than one occasion, but none were to be found.

What we did see were a lot of beautiful birds, especially vermilion flycatchers — and boy, does that name aptly fit this species. Males are a vibrant vermilion color — very showy! We also saw zone-tailed and gray hawks at the ranch, which are some of my favorite birds at this location.

We had a great sparrow day too. We saw six sparrow species — black-throated, Brewers, white-crowned, Lincoln’s, savannah and chipping. It didn’t occur to me until after we got back that we missed song sparrows, which we could have easily gotten at the ranch.

It was a good day for flycatchers, vireos and warblers, too. In addition to the vermilion flycatcher, we saw Say’s phoebe, western kingbird and an ash-throated flycatcher. We saw two varieties of vireos — Cassin’s and Bell’s. We saw Wilson’s warbler, yellow-rumped warbler and orange-crowned warbler.

Turkey vultures were back in full-force. They are harbingers of spring, as are the swallows at San Juan Capistrano. As we spent time at the ranch, we had the opportunity to compare turkey vultures and zone-tailed hawks in flight. To the naked eye, they look very similar. However, with binoculars, it is easy to tell the two apart.

Now that we are in April, it is time to seriously consider putting out both hummingbird and oriole feeders if you have not already done so. Having a feeder out before they arrive will entice them to linger a little longer in your yard as they migrate through. I have already received a report this week of black-headed grosbeak and hooded oriole, so our spring migrants are beginning to filter into the area. Be ready!