New project that hearkens back to New Deal aims to help the homeless, curb panhandling in Prescott
Will work for ... 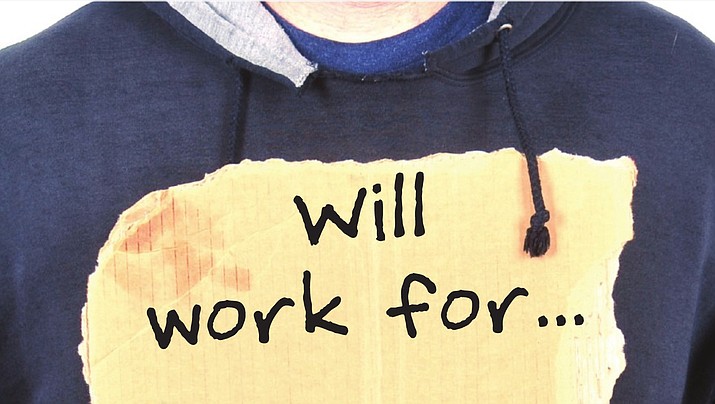 On May 1, two local agencies -- Coalition for Compassion and Justice and U.S. VETS -- intend to launch a new job creation program, Workers Progress Agency (WPA), one inspired by a program with a similar acronym started in the late 1930s by President Franklin Delano Roosevelt to give unskilled workers a chance at employment.

The program that would put homeless people to work could be beneficial not just to those who would be given an opportunity to work, but to the city’s roadsides, golf course, and airport as well.

Panhandlers hold up signs at entrances to businesses and intersections asking for help to fill up the gas tank, cover a meal, or work that will help with living expenses.

Some folks open their wallets to help. Some ignore as they see these as scams. Some are annoyed.

In recent months, city and community leaders in Prescott have been asked to take action.

Coalition for Compassion and Justice and U.S. VETS leaders hear it all. They, too, are eager to find a solution – their mission is to remedy homelessness beyond offering a daily meal and safe place to sleep at night.

CCJ Executive Director Jessi Hans and U.S. VETS Executive Director Carole Benedict said their agencies are part of a community coalition that wants to enable even the chronically homeless to become connected with resources so they can regain their independence.

Finding jobs for these men and women with no income, mental health and addiction issues, and spotty work histories, is part of the mix.

On May 1, the agencies intend to launch a new job creation program, Workers Progress Agency (WPA), one inspired by a program with a similar acronym started in the late 1930s by President Franklin Delano Roosevelt to give unskilled workers a chance at employment. The modern program is a collaborative effort with the city to provide day-labor, minimum-wage work opportunities of six hours a week for up to eight people. The initial jobs will be oriented around park cleanup.

The tasks are intended to be suitable for those with limited skills, or who may have either a physical or mental disability such that they cannot handle the demands of a regular five-day, eight-hour work schedule. In time, Hans and Benedict hope other local businesses or companies will consider hiring one of their crews for simple tasks, such as basic landscaping or building cleanup. Hans and Benedict have already identified some potential clients. Hans intends to seek out other panhandlers to learn their stories and offer them a chance for a more legitimate, sustainable way of earning a wage. She said she has already talked with some panhandlers only to find out they are doing it because they needed to buy a new pair of pants, or shoes, so they could go to a job interview.

“There are often misconceptions about their reasons,” Hans said, noting she hears the stories of those who are liars and manipulators too lazy to work but in her experience “that is not usually what happened.”

The one-year pilot project will be funded through a $10,000 United Way of Yavapai County social enterprise grant, a $10,000 community block grant and a proposed $9,500 city grant. CCJ will use those funds to pay the employees. CCJ will also assign one of its current part-time staff members to accompany the work crews on their jobs to ensure that people are doing what is expected.

If outside businesses contract for crews – all work would be done in multi-person crews with a CCJ on-site supervisor – then those jobs would be paid on an hourly basis, Hans said.

The work contract for these men and women will require they pledge not to “fly signs” or panhandle to earn money, Hans said. In most cases, Hans said panhandling is not a lucrative career opportunity, but rather a desperate attempt for someone who is not a top candidate for more suitable work to earn needed cash.

The WPA project is a proactive move to enable people who are otherwise unemployable get connected with meaningful work that may lead them to other work and income opportunities that go beyond toting around a cardboard sign, Benedict said. She said it is not only about correcting a perceived city nuisance but offering the impoverished, or homeless, a chance to reclaim their dignity.

“Everybody wants to provide for themselves,” Benedict said. In cities across the country this has become a proven model of success, and Benedict said she sees no reason it will not work here.

The WPA idea came out of a brainstorming session between city government leaders and community service agencies on how best to address rising concerns about the problem while still remaining compassionate to those in need.

Coping with the chronic difficulties of homelessness and poverty requires an ongoing community collaboration, said Benedict, the founder of a local coalition of some 50 area social service agencies. Prescott’s latest effort has an enhanced chance of success because of the partnership these agencies have forged with their city leaders, particularly Mayor Greg Mengarelli, City Manager Michael Lamar and Police Chief Debra Black.

Mengarelli was similarly enthusiastic about the partnership and the program.

“I think this is a great program because it really offers a lot of dignity for those involved who are wanting to do better for themselves, and work,” Mengarelli said. “Hopefully, this is a starter job for some who for whatever reason have fallen on hard times. And I hope this will be a step up and lead to the next job as well.”

“I have high hopes,” Benedict said. “This is a fantastic opportunity with the collaboration between city government and the community service agencies. It takes everyone partnering together to make this work.”

CCJ’s mission in New Year is to end and prevent homelessness
Homeless effort earns an award for local group
Prescott/CCJ homeless work program gets underway
Helping the homeless creatively
Message to community on homelessness: Affordable, accessible housing is the answer