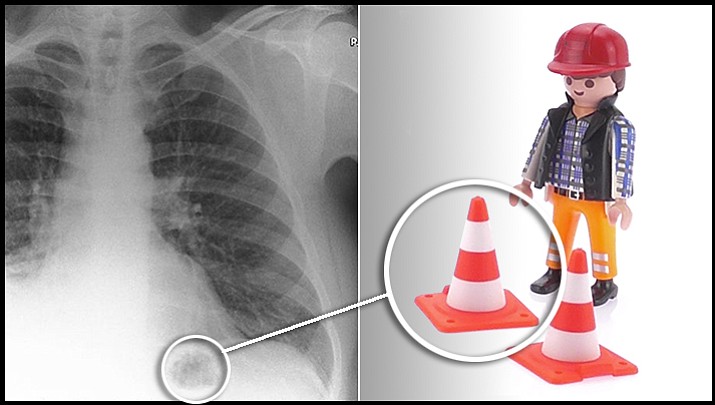 This "tumor" turned out to be a Playmobil toy a 47-year-old man had inhaled as a child. (Biomedical Journal Case Reports)

The Playmobil cone taken out of a UK man’s lung after 40 years. (Biomedical Journal Case Reports)

A handyman suffering from a persistent cough for more than a year was told he had a malignant tumor in his right lung. The "tumor" turned out to be a Playmobil toy the 47-year-old man had inhaled as a child.

When the unnamed UK patient was 7 years old he received a Playmobil set for his birthday that included a small traffic cone, which he apparently inhaled and it became forgotten.

Initially searching for the tumor, Doctors at Royal Preston Hospital in Preston performed a bronchoscopy, a procedure that uses a thin scope to look at a patient’s airways.

They found the toy lodged in the man's lung. They removed it with forceps and published the condition in Biomedical Journal Case Reports with the title, “An airway traffic jam: a plastic traffic cone masquerading as bronchial carcinoma.”

While many children will accidentally inhale small toys the medics described the man's case as something “unheard of” because in most cases doctors are able to diagnose the cause of related symptoms within a week.

According to the BMJ report, doctors believe the inhaled toy went unnoticed for more than 40 years because “the patient’s airway was able to remodel and adapt to the presence of this foreign body." and related symptoms were likely masked when the patient began smoking.

The patient’s persistent cough cleared up four months after the toy was removed.

“On a positive note, his symptoms improved markedly and he finally found his long lost Playmobil traffic cone in the very last place he would look,” the doctors wrote in the BMJ report.

Weathering COPD during the wheezing season
COPD sufferers brace for winter
Missing dentures found stuck in throat 8 days after surgery
To Your Good Health: With persistent cough, a search for underlying cause is key
Heavy smoke from prescribed burns affecting Yavapai County