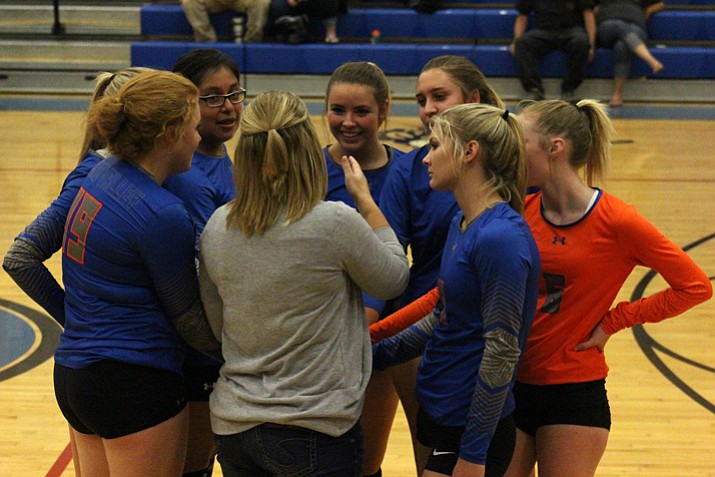 The Chino Valley volleyball team gets together during a timeout against the Cowboys on Wednesday, Sept. 28, 2017, in Camp Verde. (James Kelley/Verde Independent)

CAMP VERDE — The Chino Valley volleyball team had some bus trouble on the way back home, but other than that Cougars enjoyed a near perfect trip to Camp Verde.

“Everything went pretty smooth for us,” Chino Valley head coach April Jelovic said. “Passing, serving was pretty good, kept the ball alive, so overall a positive outing for us.”

The win is the Cougars’ second in a row and their fourth in their last six after they started the season just 2-5.

“I think we did very good, we worked together very good and we talked a lot and we were just having fun,” Chino Valley sophomore outside hitter Katryna Davis said.

Camp Verde has lost 10 of their last 12 matches.

“We were really inconsistent,” Camp Verde head coach Britney Armstrong said. “We would pass really great, get a good set and then we just couldn’t finish it or we would finish it and the ball would come back for a serve-receive or a pass and then we couldn’t pass it.”

Davis said the Cougars have been playing better since they talked it over.

“We’ve been playing very good, we’ve lost a few times but as long as we’re having fun and communicating and just trying our best, we can do pretty good,” Davis said.

An injury to senior Taelor Winegar led to the Cougars to shake up their rotation.

Most of Chino Valley’s losses came at tournaments. They are 3-3 in power point matches and ranked 24th. Camp Verde was No. 48 in the 2A conference going into Wednesday’s matches.

Jelovic said Lopez and Davis have really stepped up for Chino Valley.

“I think we’ll be fine,” Jelovic said. “We were a little worried after that injury how we were going to be, how we were going to work together because we we’re a really young line up now with the two freshmen and two sophomores all the time, but overall. I’m excited to see how we’re going to do as we get into region play.”

Chino Valley returns to region play to face The Odyssey Institute on the road tonight at 6 p.m. Their next home match is Thursday, Oct. 5, against Northwest Christian at 6 p.m.

James Kelley is a sports writer for the Verde Independent. Follow him on Twitter at @JamesKelley520, or email him at jkelley@verdenews.com.