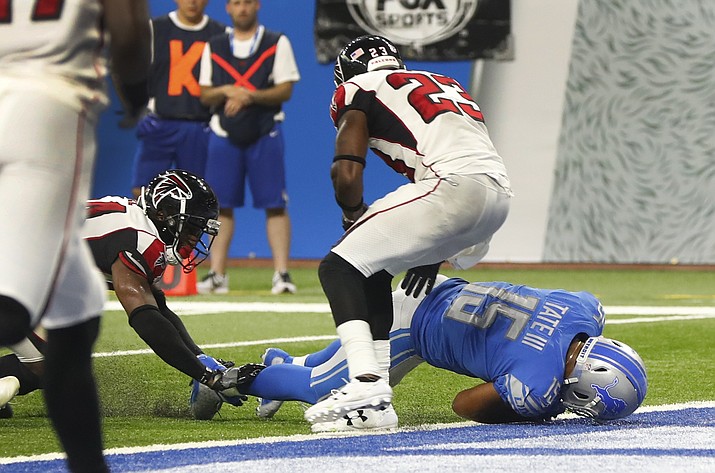 Detroit wide receiver Golden Tate (15) falls into the end zone for a 1-yard touchdown reception during the second half of an NFL football game, Sunday, Sept. 24, in Detroit. The Replay Official reviewed the score ruling, and the play was reversed. After play reversal, referee rules a 10 second runoff and the game is over. (Paul Sancya/AP)

DETROIT — Matthew Stafford’s pass to Golden Tate was ruled to be just short of the goal line in the final seconds, overturning the call on the field and allowing the Atlanta Falcons to hold on for a 30-26 win over the Detroit Lions on Sunday.

Stafford threw a slant to Tate and a video review determined he was down just inside the 1 with 8 seconds left. By rule, 10 seconds had to run off the clock, and that ended the game because the Lions didn’t have any timeouts.

“To recap in DET: ruling on the field was a TD which stops the clock. After review, Tate was short which would have kept the clock running ... This carries a 10-sec runoff. Had the call on the field been correct initially, the clock would have run out. That’s the spirit of the rule.”

FOXBOROUGH, Mass. — Tom Brady connected with Brandin Cooks for a 25-yard touchdown pass with 23 seconds left, his fifth TD throw of the game.

Brady finished 25 of 35 for 378 yards as New England (2-1) won its fifth straight regular-season meeting with Houston (1-2) and seventh of eight overall.

CHICAGO — Jordan Howard scored on a 19-yard run in overtime to lead the Bears.

Howard’s winning score came two plays after rookie Tarik Cohen broke off an electric run for what appeared to be a 73-yard winning touchdown. But he was ruled out at the Pittsburgh 37. Howard took over from there, and the Bears (1-2) came away with a surprising victory.

On third-and-10 from his 21, Rodgers took advantage of yet another free play after defensive end Michael Johnson was whistled for offside. Officials let the play continue and the two-time NFL MVP found Allison on about a 40-yard pass before the receiver beat a couple defenders for more yards.

CARSON, Calif. — Alex Smith threw two touchdown passes in the first 9 ½ minutes against what used to be his hometown team, Terrance Mitchell had two interceptions and rookie Kareem Hunt scored on a 69-yard run.

The Chiefs (3-0) beat the Chargers for the seventh straight time and have won 12 straight AFC West games. Los Angeles’ Philip Rivers threw three interceptions and the Chargers fell to 0-3 in their first season playing in the 27,000-seat StubHub Center after moving from San Diego.

NASHVILLE, Tenn. — Marcus Mariota threw for 225 yards and two touchdowns, and the Titans scored 21 straight points in rallying to beat the Seahawks.

Cousins was a spectacular 25 of 30, including TD passes to Thompson, Vernon Davis and a 52-yarder to Josh Doctson. Thompson had 150 yards receiving and 38 yards rushing, joining Jamaal Charles as the only running backs to put up 150 yards receiving against the Raiders (2-1) since they moved to Oakland in 1995.

Taylor went 20 of 26 for 213 yards with a 2-yard touchdown to Andre Holmes and a 6-yarder to Charles Clay. Taylor got lucky on the touchdown pass to Holmes , as the ball deflected off the hands of Zay Jones just inside the goal line and bounced directly to Holmes in the back of the end zone.

While a lot of the focus heading into the season was on whether the revamped Jets roster would be good enough to win any games, New York made Miami look like the team in the middle of a rebuild.

Allen Hurns and Leonard Fournette also scored touchdowns for the Jaguars (2-1), who have won each of their last three games played at the venue. This one, by far, was the easiest. The Ravens (2-1) managed just 186 yards of total offense, including minus-1 yard in the first quarter. They managed 15 yards in the first half, and picked up only 12 first downs.

MINNEAPOLIS — Case Keenum gave Minnesota a brilliant performance in relief of Sam Bradford, passing for three touchdowns and a career-high 369 yards without a turnover.

Stefon Diggs had 173 yards receiving and caught two of Keenum’s throws for scores, one short and one long .

INDIANAPOLIS — Jacoby Brissett ran for two touchdowns, threw for another and the Colts held off Cleveland’s late charge.

Brissett, acquired in a trade with New England earlier this month, looked much more comfortable in his second start, going 17 of 24 with 259 yards and running five times for 14 yards. Indy (1-2) avoided its first 0-3 start in six years.