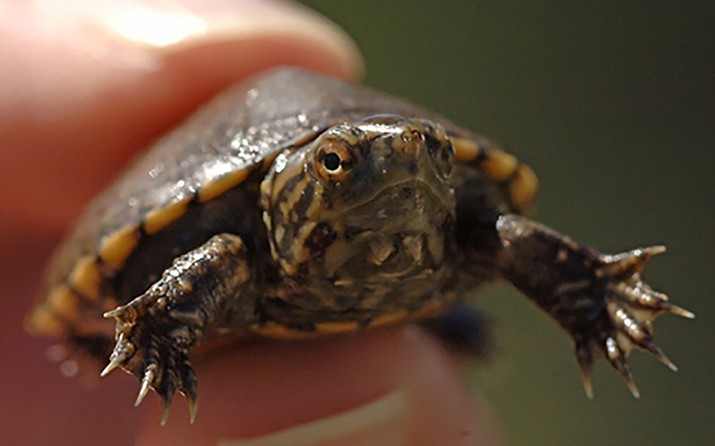 The Sonoyta mud turtle is an aquatic species that lives in the Sonoran Desert, a difficult enough existence that experts say is being made harder by climate change. The federal government granted the turtle endangered species status Wednesday. (Photo by George Andrejko/Arizona Game and Fish Department)

An adult Sonoyta mud turtle, of which there may be as few as 100 left. The turtle, which is found only in Quitobaquito Springs in Arizona in scattered pockets in northern Sonora state in Mexico, was declared an endangered species, capping a 20-year fight. (Photo courtesy U.S. Fish and Wildlife Service)

WASHINGTON – It may not be surprising that an “aquatic desert” turtle faces long odds in life, but environmentalists and biologists still welcomed this week’s endangered species designation for the Sonoyta mud turtle.

The U.S. Fish and Wildlife Service announced the designation Wednesday, citing threats from climate change to loss of habitat for the southern Arizona animal, whose numbers are believed to have dwindled to as low as 100 turtles.

“The Sonoyta mud turtle is clearly in danger of extinction,” Steve Spangle, a field supervisor with Fish and Wildlife’s Arizona Ecological Services, said in a release announcing the listing.

“Protecting it under the Endangered Species Act will marshal increased attention and the resources needed by our U.S. and Mexican conservation partners to improve and expand its dwindling habitat and populations,” Spangle said.

The turtle, a subspecies of the Sonoran mud turtle, is found in northern Mexico and in the Quitobaquito Springs in Organ Pipe Cactus National Monument, its only natural habitat in the U.S. Those springs are also the only habitat for the Quitobaquito snail and the desert caper plant, according to the National Park Service.

The Sonoyta mud turtle is a dark, pocket-sized freshwater turtle that lives in permanent aquatic habitats and eats insects, snails, fish, frogs and some plants. They have a mottled pattern on their head, neck and limbs. They must have land and water in close proximity.

“That is the problem,” said John Iverson, a biology professor at Earlham College in Indiana, who first identified the Sonoyta turtle as a subspecies in the 1980s. “They need water and the hydro period is decreasing.”

Their aquatic nature can be seen in their webbed feet, he said.

Doug Duncan, a fish biologist for Fish and Wildlife, said the turtles face a number of threats ranging from a low water supply, to climate change, warranting protection under the Endangered Species Act.

Another threat, according to Iverson, is a lack of genetic variation caused by the small population.

“Whenever you have a small population there is a risk of genetic bottlenecks,” he said.

Environmentalists welcomed the endangered designation, which has been under consideration for 20 years and was the subject of a lawsuit by the Center for Biological Diversity.

Noah Greenwald, the center’s endangered species director, said that when “there is a species down to just one population in the U.S, and just a few in Mexico, the protections are needed.”

Spangle said that with the designation, the U.S. will work with Mexico to expand the populations and habitat. Iverson said that the turtle “is as safe as it can be, given the circumstances,” and that “Mexico is where the problem is.”

Other groups of the turtle live in Mexico, but Iverson said their habitat there is polluted, and water is pumped at an unhealthy rate.

“Hopefully by putting it on the list we can get them to clean up their act,” Iverson said of Mexican officials. He said that despite the fact that Mexico has more populations of the turtle, it’s likely “the last to go will be the one in the U.S.”