All about sound with Everly Brothers tribute 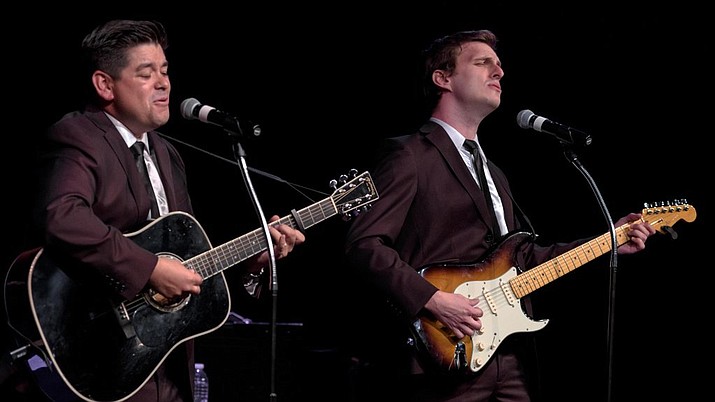 The influential sounds of The Everly Brothers will permeate the Elks Theatre and Performing Arts Center this weekend with Lonely Street Productions’ “Bye Bye, Love.”

The show features Alex Mack and Chach Snook performing hits like “Wake Up Little Susie,” “All I Have to Do is Dream” and “Cathy’s Clown.” The two split apart their roles as Don and Phil Everly, Mack said, noting that the brothers had the same kind of sound and would mix it up who sang top or bottom. As such, he and Snook are throwing it around and doing what fits their voices best, he said.

It was interesting in putting together what songs to include in the show because there’s five or 10 songs everybody knows and those are the hits, Mack said. With other songs, another artist might have a different version of it that ended up being a hit, but the Everly Brothers’ version was first and was the version that whoever had the hit fell in love with in the first place, he said, mentioning a-ha’s version of “Crying in the Rain.”

“There’s a ton of songs that the Everly Brothers were involved in and did the first or kind of like the definitive recording. It was really fun finding all of that,” Mack said, remarking that there are a few other artists featured in the show. “We go through some influences and some other groups that they influenced or were around at the same time. We have a little bit of early Beatles and some Simon and Garfunkel. Those groups were so heavily influenced by the Everly Brothers sound, the country meets rock and roll sound and especially the harmonies. We had to put some of that in there.”

The tribute takes the stage at 7 p.m. on Saturday, Sept. 23, at the Elks Theatre and Performing Arts Center, 117 E. Gurley St. Tickets are $25 for adults, $22 for seniors and $30 for opera box seats. Tickets are available online at www.prescottelkstheater.com, by calling 928-777-1370 or at the door one hour prior to the performance.

Costuming for the show was simple because it’s really built around the sound, he said. Where Elvis or Johnny Cash have a large amount of visuals tied up with the music, the Everly Brothers had powerful and effective voices, making it so the music really speaks for itself, Mack said. Not only that, but any concert of an artist from the 1960s and 1970s will include them talking about the brothers or playing some of their songs, he said.

The songs are just so fun to sing too, he said, commenting he doesn’t usually get to sing with another person. It’s a cool feeling when he’s right in tune and the two of them are harmonizing, Mack said. If he was just singing solo, it’d be all right, but it’s a treat to have another person to blend with and hit those harmonies and notes, getting those tones he normally wouldn’t have, he said.