AP Top 25: Defending champion Clemson moves up to No. 2
Tigers jump ahead after big win against Louisville 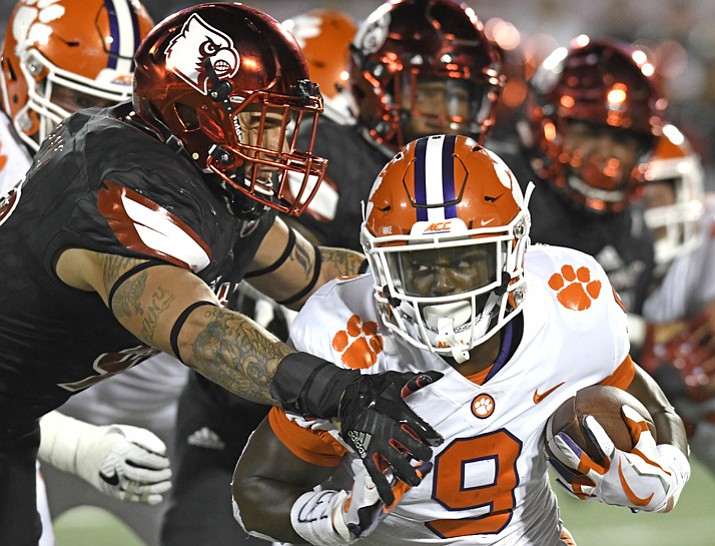 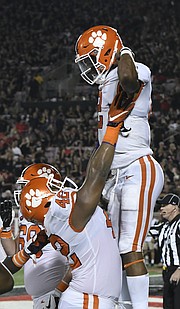 Clemson moved up to No. 2 in The Associated Press college football poll, jumping Oklahoma and closing in on Alabama after beating a team ranked in the Top 15 for the second straight week.

The Tigers received 15 first-place votes, the most the defending national champions have received this season, and 1,446 points Sunday after beating Louisville 47-21 on the road. Alabama remains No. 1 with 45 first-place votes and 1,504 points.

Oklahoma slipped one spot to No. 3. The Sooners received the remaining first-place vote.

Penn State moved up a spot to No. 4, flip-flopping with No. 5 Southern California. Oklahoma State rose three spots to No. 6, its best ranking since late in the 2013 season.

Washington is No. 7 and three Big Ten teams round out the top 10: Michigan, Wisconsin and Ohio State.

Clemson started the season at No. 5 because of some uncertainty at quarterback, where it had to replace Deshaun Watson, and other offensive positions. The Tigers quickly have shown they are still a legitimate threat to win a national title by smothering Auburn last week and then routing Lamar Jackson and Louisville on Saturday.

Clemson has been ranked no lower than sixth in the AP poll since Oct. 4, 2015, and has been ranked in the top five for 28 straight polls, the longest such active streak in the country. Alabama is second at 26 straight weeks.

Six ranked teams lost on Saturday, including four to unranked teams, shaking up the bottom of the Top 25.

— No. 17 Mississippi State made the biggest move among the newcomers, entering the rankings for the first time this season at No. 17. The Bulldogs bashed LSU 37-7 in Starkville. Mississippi State had not been ranked since Nov. 22, 2015.

— No. 22 San Diego State beat a Pac-12 team for the second straight week — this time Stanford — to enter the rankings. The Cardinal fell out, but two more Pac-12 teams moved into the rankings.

Joining Stanford in tumbling out of the rankings were:

— Tennessee, which was beat by Florida on a last-play touchdown pass.

— No. 20 Florida moved up four spots, thanks in part to losses by a few other teams near the bottom of the rankings.

No. 16 TCU at No. 6 Oklahoma State. The Cowboys get most of their toughest Big 12 games at home, starting with the Horned Frogs.