All lanes open on I-17; expect delays from Cordes to Bumble Bee
Fire near containment; cause under investigation 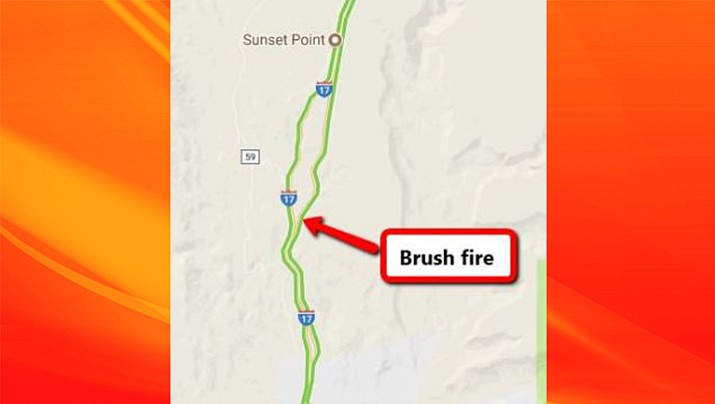 A brush fire burning in the median on Interstate 17 south of Sunset Point is causing extensive southbound delays, as of 4 p.m. Sept. 16, according to the Arizona Department of Transportation. For the most current information, visit ADOT’s Travel Information Site at az511.gov, or follow ADOT on Twitter (@ArizonaDOT) or call 511.

All lanes are now open on Interstate 17 southbound between mileposts 252 and 249, according to the Arizona Department of Transportation. The left lane had been closed due to a brush fire.

Motorists should continue to expect long delays due to a 15-mile backup from Bumble Bee Road to north of Cordes Junction. To avoid delays, motorists can take Highway 260 through Camp Verde to Highway 87 through Payson, ADOT reports.

A brush fire burning in the median on Interstate 17 at milepost 249 is causing extensive southbound delays, according to the Arizona Department of Transportation.

Traffic is backed up about 7 miles from Bumble Bee Road to Badger Springs Road. Motorists should consider taking an alternate route, including Highway 260 through Camp Verde to Highway 87 through Payson.

The Daisy Mountain Fire Department (DMFD) was the first to respond to the scene with about 40 firefighters. The Maricopa County Sheriff’s Department has been helping with air operations and reconnaissance while ADOT has assisted with traffic control.

“The fire is making a push to the north ever so slightly, so I wouldn’t say we’ve got it fully contained,” said Dave Wilson, DMFD Battalion Chief, at 4 p.m.

The state and Bureau of Land Management were just about to relieve DMFD from duty as Wilson was speaking because the fire is burning on their land.

For the most current information about highway closures and restrictions statewide, visit ADOT’s Travel Information Site at az511.gov, and follow them on Twitter (@ArizonaDOT) or call 511.

Update: I-17 delays clear near Sunset Point
Update: Interstate 17 is open in both directions after fire
Four-vehicle crash on I-17 causes major traffic backup
Update: I-17 is now open; wildfire under control
Both I-17 southbound lanes open south of Cordes Junction