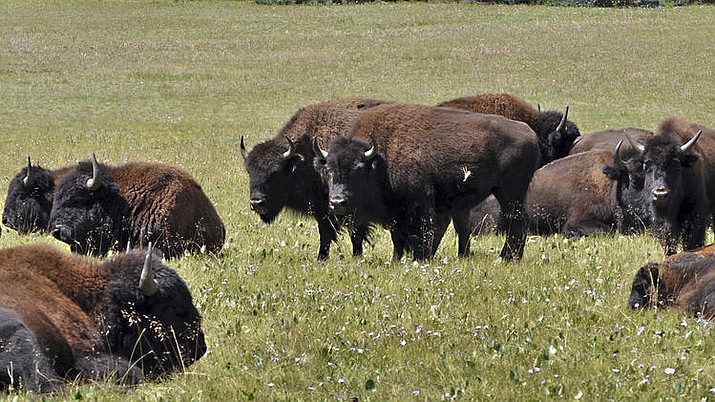 Bison in the national forest adjacent to the Grand Canyon in Northern Arizona group together in this 2010 file photo. The National Park Service has a plan to thin the bison population around the Grand Canyon through roundups and by seeking volunteers who are physically fit and proficient with a gun to kill the animals that increasingly are damaging park resources. (Kaibab National Forest via AP, File)

FLAGSTAFF, Ariz. (AP) — The National Park Service plans to thin a herd of bison in the Grand Canyon through roundups and by seeking volunteers who are physically fit and proficient with a gun to kill the animals that increasingly are damaging park resources.

Some bison would be shipped out of the area and others legally hunted on the adjacent forest. Within the Grand Canyon, shooters would be selected through a lottery to help bring the number of bison roaming the far northern reaches of the park to no more than 200 within three to five years.

About 600 of the animals now live in the region, and biologists say the bison numbers could hit 1,500 within 10 years if left uncontrolled.

The Grand Canyon is still working out details of the volunteer effort, but it's taking cues from national parks in Colorado, the Dakotas and Wyoming that have used shooters to cut overabundant or diseased populations of elk. The Park Service gave final approval to the bison reduction plan this month.

The bison have been moving in recent years within the Grand Canyon boundaries where open hunting is prohibited. Park officials say they're trampling on vegetation and spoiling water resources. The reduction plan would allow volunteers working in a team with a Park Service employee to shoot bison using non-lead ammunition to protect endangered California condors that feed on gut piles.

Hunters cannot harvest more than one bison in their lifetime through the state hunt, making the volunteer effort intriguing, they say.

"I would go if I had a chance to retain a portion of the meat," said Travis McClendon, a hunter in Cottonwood. "It definitely would be worth going, especially with a group."