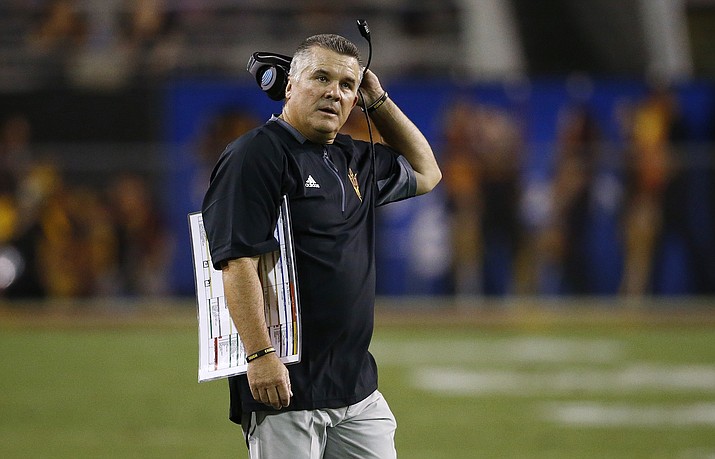 Arizona State coach Todd Graham stands on the field during the first half against San Diego State on Saturday, Sept. 9, 2017, in Tempe. (Ross D. Franklin/AP)

TEMPE — Arizona State has gotten its sixth season under coach Todd Graham off to a shaky start.

The Sun Devils opened with a less-than-stellar win over New Mexico State and followed that up with a bad-in-all-phases home loss to San Diego State.

It’s early in the season, so the Sun Devils still have time to turn things around, but they better do it soon. The schedule gets tougher from here, starting with Saturday’s game at Texas Tech.

“The message is simple: We’ve got to put what’s behind us behind us and do a better job as coaches and players,” Graham said during his weekly news conference Monday.

Arizona State has struggled, giving up big plays on defense the past two seasons. That’s happening again this season, despite a new defensive coordinator and supposed upgrades.

Unlike the past two seasons, the Sun Devils are struggling to run the ball — thanks in part to injuries — and have been shaky on special teams.

Arizona State had problems with big plays against New Mexico State, but was able to overcome those for a 37-31 win.

The big plays reeled off by San Diego State were too much to overcome.

Aztecs running back Rashaad Penny had one early, racing off on a 95-yard touchdown run in the first quarter, and later scored on a 33-yard pass. The Sun Devils also have struggled on third downs, allowing teams to convert more than 50 percent of the time.

Arizona State’s running game was almost nonexistent against the Aztecs.

Demario Richard did not play against San Diego State after injuring his right leg early against New Mexico State and Kalen Ballage went out with an injury in the second half. Even so, Arizona State was struggling on the ground before Ballage got hurt and finished with 44 yards on 31 carries.

Arizona State also had multiple missed blocking assignments and receiver John Humphrey dropped what would have been a long touchdown pass with the Sun Devils trailing 20-14 in the third quarter.

Special teams had been a strong point the past few seasons, thanks to having two of the nation’s best handling kicking duties.

Arizona State has been not-so-special so far.

Punter Michael Sleep-Dalton has been forced to kick exclusively left-footed — he can kick with either foot — the first two games due to a right leg injury and has struggled at times. He had a couple of short kicks against San Diego State, including a 12-yard shank late in the first half that set the Aztecs up for a field goal.

The Sun Devils also gave up a 99-yard kickoff return for a touchdown to start the second quarter, immediately after Ballage scored on a 1-yard run to tie the game at 7-all.

“It was a disaster special teams-wise, which has not been the case,” Graham said. “We’ve usually done pretty well.”

The road only gets tougher from here.

After that, the Sun Devils play at No. 19 Stanford, host No. 6 Washington, play at Utah and have No. 4 Southern California at home on Oct. 28.