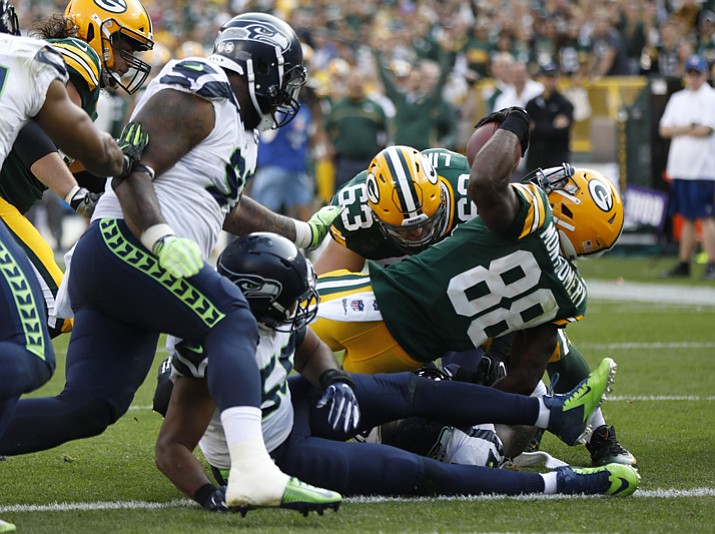 Green Bay Packers’ Ty Montgomery runs for a touchdown during the second half against the Seattle Seahawks on Sunday, Sept. 10, 2017, in Green Bay, Wis. (Mike Roemer/AP)

Aaron Rodgers was 28 of 42 for 311 yards and added a 32-yard touchdown pass to Jordy Nelson to make it an eight-point game late in the third quarter.

Rodgers’ regular-season streak of passes without an interception ended at a career-high 251. The Seahawks’ defense reinforced by the return of safety Earl Thomas bottled up receivers from making many big plays and put plenty of pressure on Rodgers.

But the Packers started denting Seattle with runs or quick passes to Nelson, Randall Cobb and Montgomery in the second half, chewing up clock in the process. A 12-play, 53-yard drive that took up more than five minutes ended with Mason Crosby’s 40-yard field goal to make it a two-score game.

Green Bay’s defense had an even better debut.

Ezekiel Elliott had a rugged 104 yards rushing and another 36 receiving two days after a judge halted his six-game suspension over a domestic violence case, although last year’s NFL rushing leader had already been cleared to play the opener.

Dak Prescott was turnover-free while throwing for 268 yards as the Cowboys dominated the NFC East rival that swept them during a 13-3 season that topped the NFC. Dan Bailey kicked four field goals.

Eli Manning didn’t have Beckham in his 200th straight start after his dynamic top target sprained his ankle in a preseason game. The Giants were outgained in the first half 265-49 while falling behind 16-0.

Manning was 28 of 37 for 211 yards with an interception and connected with new receiver Brandon Marshall just once, late on a desperation drive with the outcome already settled.

LOS ANGELES — Jared Goff passed for a career-high 306 yards and a touchdown in his first victory as an NFL starter, and the Rams routed the Colts in Sean McVay’s impressive debut as the youngest head coach in modern league history.

Todd Gurley had 40 yards rushing and 56 yards receiving while the Rams roared to a 37-3 lead in the third quarter. Los Angeles snapped a six-game skid at the Coliseum with its most impressive performance since returning home from St. Louis last year.

Rams linebacker Alec Ogletree celebrated the win with a Gatorade shower for McVay on the sideline in the final minutes.

Tolzien passed for 128 yards in his fourth career NFL start in place of Andrew Luck, who wasn’t ready to return from a right shoulder injury.

The butt of jokes following their epic Super Bowl collapse against New England, the Falcons survived as the Bears had a first down at the Atlanta 5 in the closing minute. Mike Glennon’s pass to a lunging Josh Bellamy on first down hit off the receiver’s hands, and Jordan Howard then dropped a simple catch at the 1.

After another incompletion on third down, Glennon got sacked by Brooks Reed.

Atlanta was clinging to a 13-10 lead early in the fourth when a scrambling Ryan fired to a wide-open Hooper near midfield. The second-year tight end from Stanford raced up the right side and stiff-armed Quintin Demps on the way to the end zone.

The Bears then went 75 yards, with Glennon hitting rookie Tarik Cohen for a 19-yard TD midway through the fourth to cut it to 20-17. Atlanta’s Matt Bryant answered with a 37-yard field goal, making it 23-17.

HOUSTON — Leonard Fournette ran for 100 yards and a touchdown in his NFL debut, and Jacksonville had 10 sacks and forced four turnovers to help the Jaguars.

The Texans hoped to provide a boost to the area ravaged by Hurricane Harvey with a win. Instead, Tom Savage struggled behind a porous line and was benched in favor of rookie Deshaun Watson at halftime with Houston down 19-0.

Blake Bortles threw for 125 yards and a touchdown, Calais Campbell had four sacks and Dante Fowler returned a fumble 53 yards for a score as the Jaguars snapped a six-game skid against Houston.

J.J. Watt returned after missing 13 games last season after back surgery, but injured his finger in the first half and finished with just one tackle.

The Texans punted on their first four possessions, and the fifth one ended when Savage fumbled on a sack by Yannick Ngakoue and the Jaguars recovered the ball.

Fournette, the fourth overall pick in this year’s draft, added his 1-yard touchdown after that.

Savage was sacked six times in the first half, playing behind a line without veteran left tackle Duane Brown, who is holding out.

CLEVELAND — Ben Roethlisberger threw two touchdown passes to tight end Jesse James as the Steelers, with minimal help from Le’Veon Bell, opened the season by holding off the Browns.

Roethlisberger improved to 21-2 against the Browns, who gave their rivals all they could handle — a positive sign for coach Hue Jackson and Cleveland fans after a horrid 1-15 season.

But the Browns couldn’t stop All-Pro wide receiver Antonio Brown, who made a leaping catch in traffic for 38 yards with 2:26 left to seal Pittsburgh’s win. Brown finished with 11 receptions for 182 yards.

Browns rookie quarterback DeShone Kizer had pulled the Browns within three on a 3-yard TD pass to Corey Coleman followed by a 2-point conversion.

The Browns have lost 13 straight openers.

NASHVILLE, Tenn. — Derek Carr threw for 262 yards and two touchdowns, and Carr won his third straight against Marcus Mariota and the Titans in as many years.

Amari Cooper caught a TD pass as the Raiders made the Titans pay for opening the season with an onside kick they couldn’t recover. Marshawn Lynch also looked very refreshed after his year away from football. Lynch finished with 18 carries for 76 yards.

Giorgio Tavecchio kicked field goals of 20, 52, 52 and 43 yards in his NFL debut. He was signed Friday to fill in for the Raiders’ all-time leading scorer and 18-year veteran Sebastian Janikowski, who’s on injured reserve with a bad back. Tavecchio has spent time in training camp with the Raiders the past four seasons but had never kicked in a regular-season game.

LANDOVER, Md. — Carson Wentz threw for 307 yards and two touchdowns as the second-year quarterback guided the Eagles in a sloppy, mistake-filled season opener.

Wentz was 26 of 39 and threw an interception that Ryan Kerrigan returned for a touchdown. But Wentz made fewer errors than Washington’s Kirk Cousins, who was picked off at the goal line and fumbled twice.

Cousins finished 23 of 40 for 240 yards with a TD pass to third-down back Chris Thompson. He was under duress all day because and was sacked four times.

Newton threw a 40-yard touchdown pass to Russell Shepard in the first half following a fumble by Brian Hoyer, then a 9-yard touchdown to Jonathan Stewart in the third quarter after Luke Kuechly intercepted Hoyer.

That helped the Panthers get off to a good start in the season opener following last year’s disappointing 6-10 finish. Despite the touchdowns, Newton did not look particularly sharp after playing just one series in the preseason as he recovered from surgery to repair a partially torn rotator cuff.

CINCINNATI — Baltimore’s rebuilt defense picked off Andy Dalton four times and forced him to fumble, making it easy for Joe Flacco in his return from a back injury.

The Ravens ended a five-game losing streak in Cincinnati by pressuring Dalton into matching his career high for interceptions, three of them in the first half. The Ravens got a pair of touchdowns 24 seconds apart late in the half to take control, with Jeremy Maclin scoring on a 48-yard run-and-catch.

Mike Tolbert also scored on a 1-yard run , while Buffalo’s defense had three interceptions, including linebacker Ramon Humber picking off Josh McCown’s pass to thwart a 2-point conversion in the third quarter.