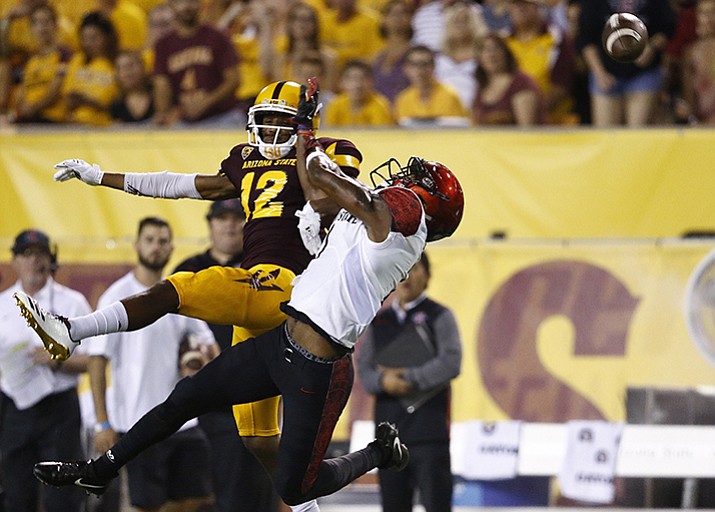 San Diego State's Kameron Kelly, right, breaks up a pass intended for Arizona State's John Humphrey (12) during the first half of an NCAA college football game Saturday, Sept. 9, in Tempe.

The run-heavy Aztecs (2-0) rolled over the Sun Devils from the start, with Penny bursting through for a 95-yard touchdown run in the first quarter.

The Sun Devils had one of their ugliest losses in six seasons under coach Todd Graham, plagued by defensive lapses, missed assignments on offense and a dropped touchdown pass by John Humphrey.

Manny Wilkins threw for 298 yards and two touchdowns for the Sun Devils.

San Diego State was seventh nationally in 2016 and opened this season by running for 276 yards in a win over UC Davis, including 197 and a pair of touchdowns by Penny.

Penny got started quickly against an Arizona State, racing off to a 95-yard touchdown after weaving through a hole on the left side.

Arizona State tied it on Kalen Ballage's 1-yard run , but Penny took off again, this time on a 99-yard kickoff return, his school-record sixth kickoff return for a touchdown.

The Sun Devils gave up another big play in the third quarter to fall behind 27-14. Faced with a third-and-21, the Aztecs caught Arizona State in bad coverage and Penny had to make just one move on a pass out of the backfield to score on a 33-yard touchdown.

Arizona State managed 27 yards of offense in the third quarter, but converted a third-and-37 into a 53-yard touchdown catch by Frank Darby early in the fourth. The 2-point conversion failed, leaving the Sun Devils down 30-20

San Diego State has won the past two Mountain West Conference titles and looked like the favorite to win a third after beating a Pac-12 team on the road.

Arizona State lost to a team from a smaller conference at home and the schedule only gets tougher from here. Graham's hot seat might be warming up.

San Diego State will make it back-to-back games against Pac-12 opponents when it hosts Stanford next Saturday.

Arizona State plays its first road game of 2017 next Saturday against Texas Tech before opening Pac-12 play against Oregon the following week.