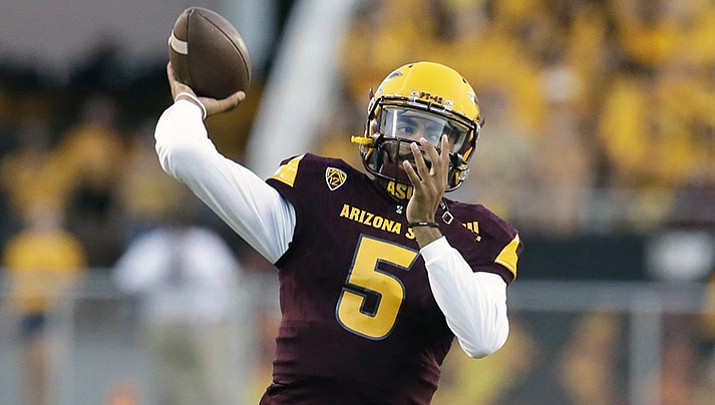 TEMPE — Arizona State has taken steps to upgrade its defense after spending the past two seasons watching opponents reel in one big play after another.

It’s still a work in progress and a big test comes this weekend.

“It’s just old school, kind of a blend between what Stanford and what Boise has done in the past,” Arizona State coach Todd Graham said. “They are going to ground and pound, run play action passes and have had great tailbacks.”

Arizona State (1-0) had the FBS’ worst passing defense each of the past two seasons and hoped for an improvement this season despite playing new cornerbacks. The cornerbacks, Kobe Williams and Joe Bryant, each had key interceptions in last week’s 37-31 season-opening win over New Mexico State, but the Sun Devils again gave up big plays.

New Mexico State rolled up 549 yards of total offense against Arizona State, including 398 yards passing by Tyler Rogers and 151 yards on 30 carries as a team.

The Sun Devils played their starters the entire first half and well into the second, but were well in control of the game heading into the fourth quarter. The Aggies managed to cut into Arizona State’s lead with a string of chunk plays in the final quarter, though, including a 50-yard touchdown run by Jason Huntley.

The stakes will be raised on Saturday.

San Diego State was seventh nationally in rushing offense last season and Penny ran for over 1,000 yards as a backup to Donnel Pumphrey. Penny ran for 197 yards and a pair of touchdowns in a 38-17 win over UC Davis last week, helping the Aztecs churn up 276 yards on the ground.

In other words, the Sun Devils could have their hands full.

San Diego State coach Rocky Long likes the challenge of playing against teams from the Pac-12 conference, even if the Aggies have not had much success doing it. San Diego State is 2-16 against the Pac-12 since 2000, but both wins came under Long, including a wild, 45-40 win over California last season. The Aztecs host Stanford next week before opening Mountain West Conference play against Air Force. “Putting (Pac-12 teams) on our schedule is a big deal to us because it’s an opportunity game,” Long told reporters this week. “That was my suggestion because I think in the long run, as college football develops, you better prove that you can compete.”

Arizona State quarterback Manny Wilkins had a strong return from an injury-plagued 2016 season. The junior threw for 300 yards and a pair of touchdowns, while extending plays with his legs. Wilkins also avoided taking hard hits, an issue that led to some of the injuries last season, but he also held the ball too long at times. Arizona State had issues protecting him as well.

San Diego State has had a knack for forcing turnovers under Long, ranking second nationally in 2015 and fifth last season. The Aztecs, who run a 3-3-5 defense, had two interceptions and recovered a fumble against UC Davis. Graham preaches ball protection as a top priority every week and it will be particularly important Saturday.

Arizona State was expected to have one of the Pac-12’s best 1-2 running back punches this season, but only had one at its disposal against New Mexico State. Senior Demario Richard was limited to one carry against New Mexico State, spending the rest of the game on or near the training table with a right leg injury. He returned to practice this week, so could return for Saturday’s game. Kalen Ballage managed pretty well without his running mate, scoring two touchdowns while rushing for 79 yards.