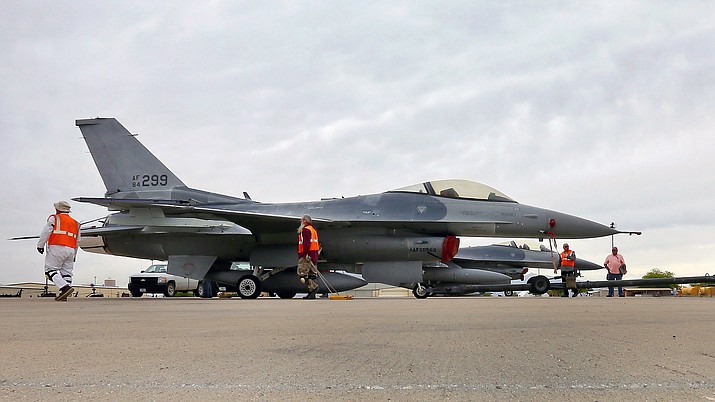 File photo of an F-16 Fighting Falcon aircraft after its arrival at the 309th Aerospace Maintenance and Regeneration Group at Davis-Monthan Air Force Base in Tucson, Ariz. (AP Photo/Matt York, File)

The pilot's identity was not released. His death was the second of an Iraqi pilot flying an F-16 that crashed in Arizona in recent years.

Roberts said the plane belonged to the Iraqi air force and that the routine training mission was being conducted in conjunction with the 162nd Wing, which is based at Tucson International Airport.

The U.S. military is training Iraqi pilots to fly F-16s at the request of Iraq's government, Roberts said.

In July 2015, an Iraqi brigadier general flying from the 162nd died when his F-16, a newer model recently delivered to the Iraqi air force, crashed during night training near Douglas.

In January 2016, a Taiwanese pilot on a training flight from Luke Air Force Base near Phoenix was killed when his F-16 went down in Yavapai County.

The wing has hosted training since 1990 and has trained pilots from Iraq, Singapore, Poland, Norway, Denmark, Oman, Belgium and the Netherlands.