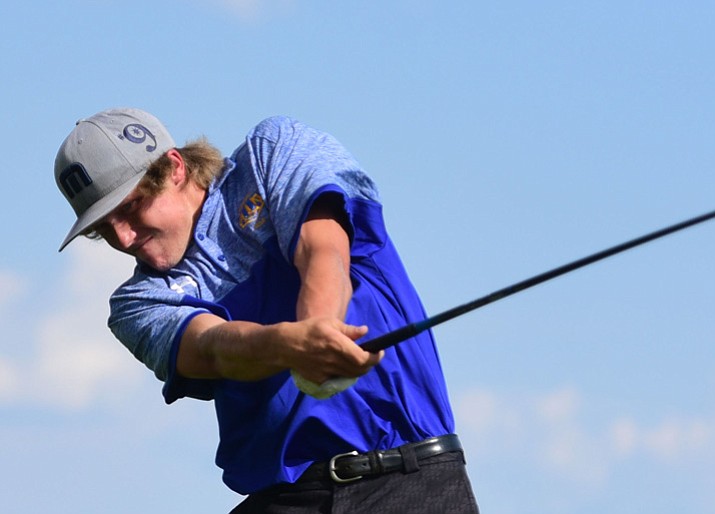 Prescott’s Payton Peterson tees off as the Badgers hosted the Mingus and Kingman at Antelope Hills Golf Course on Tuesday, Sept. 5, in Prescott. (Les Stukenberg/Courier)

Joey Christopherson shot an even par 36 to lead the field, Ben Osterloh turned in a 1-over par 37 card and the Prescott golf team rolled to its fourth-straight victory to open the season, defeating second place Mingus by 23 strokes Tuesday afternoon.

The Badgers combined to shoot a 9-over par 153, while the Marauders took second with a 32-over par 176 on the front nine at Antelope Hills Golf Course in Prescott.

Kingman finished in third, turning in a 202 (+58) after nine holes with storm clouds threatening in the distance.

Prescott’s Payton Peterson finished third overall with a 3-over par 39, while Chase Kasun was fourth with a 40 (+4). Brance Christopherson, a junior, took fifth with a 5-over par 41 on Tuesday.

“For all of them to shoot in the 30s, or low 40s, is quite amazing,” second-year Prescott golf head coach Tony Dalton said.

Osterloh’s stroke score was especially impressive, according to Dalton. The freshman struggled on No. 3 at Antelope Hills, hitting his tee shot in a distant pine tree.

Osterloh took a drop, which went sailing out of bounds. He finished with a nine on No. 3, but recovered to pencil in a birdie on No. 4, and an eagle on his next hole.

“It was impressive,” Dalton said.

Other standouts during Tuesday’s round include Mingus’ Noah Daher. The freshman shot a 6-over par 42 for sixth overall, while sophomore teammate Justin Tanner turned in a 43 (+7) card, good enough for seventh overall.

Ethan Brogdon tied Tanner for seventh with a 43, while Hayden Tanner of Kingman finished ninth with an 11-over par 47.

Prescott is set to travel south to Mesa to participate in The Rivalry Cup at the Arizona Golf Resort on Friday, Sept. 8. Tee time Friday was not available at press time.