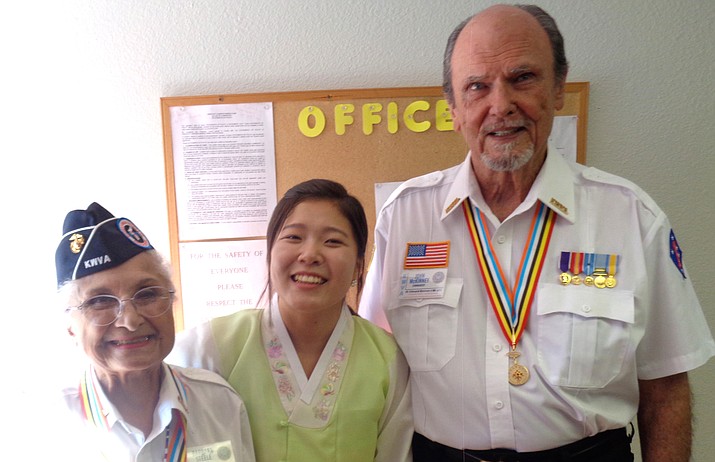 A Courier column published four years ago was instrumental in bringing to Prescott early last month a vibrant group of young people with the Voluntary Agency Network of Korea (VANK).

The column I wrote appeared on May 7, 2013, was headlined “This Marine was one of ‘a few good women,’” and focused on Prescott resident Barbara Beltran Steele, who joined the Corps in December 1950 and now is a member of the local Korean War Veterans Association’s Chapter 311 and also the Prescott Marine Corps League.

The column, subsequently reprinted in the Sunday Journal, a Korean newspaper published in Los Angeles, caught the eye of Ambassador Key Cheol Lee, Consul General of the Republic of Korea in that city, and eventually — in July of this year — he proceeded to couple a business visit with Arizona Governor Doug Ducey in Phoenix with a social visit with Barbara, motoring to Prescott on July 26.

Earlier — in 2010 — an article in the Sunday Journal described the Dec. 7, 1950 wounding of Barbara’s brother Edward, a U.S. Marine corporal and a Purple Heart and Bronze Star recipient who lost both of his heels to amputation following the freezing of his feet in the fighting at the Chosin Reservoir, and he was honored in a Korean War Veterans appreciation night event in June of 2010 in the Santa Barbara, Calif., hometown of the Beltran family.

And, during Ambassador Lee’s visit with Barbara, he presented her with gifts that included two sketches that Edward had made of American GIs and UN soldiers on duty in Korea, with the artwork previously having been hung in the LA consulate.

Barbara had two other brothers in addition to Edward who were Korean War veterans, with Herbert and William serving with the U.S. Navy on battleships involved in the shelling of North Korean targets. All three are deceased, with Edward and Herbert dying in 2010 and William passing away in 2013.

Fast-forward to last month’s aforementioned visit to Prescott of a cadre of young people from Seoul, South Korea, whose VANK organization’s World Changer program is a social network tool “which connects people in the world” by helping them “to share the solutions to global issues which should be solved to build world peace.”

The gathering, held in the clubhouse of the Prescott Gardens Mobile Home Park on Copper Basin Road, was hosted by the local KWVA chapter, with four of its members in attendance.

Heading the contingent of South Koreans was a young man, Gitae Park, along with a young woman, Bok Yung Kim, dressed in traditional Korean attire, who moderated a question-and-answer session with the quartet of combat veterans geared to expressing the appreciation that the Koreans had for the help and sacrifices of all the American veterans in saving their country.

The four included John McKinney, a retired Marine staff sergeant and Purple Heart recipient who is in his sixth term as commander of the KWVA, H. Edward Reeves Chapter 311; George Thyden, a retired USMC major who was on a different forward observation team than McKinney’s in Korea but who remained in the Corps, became a pilot and went on to serve in Vietnam; George Bjotvedt, an Army first lieutenant who was a platoon leader attached to a Puerto Rican battalion; and Robert Reynolds, an Air Force aerial gunner who flew in B-26s and was a staff sergeant at the time of his discharge.

And special guest Barbara Steele? Well, that lively little lady — all 5 feet 1 of her — is 85 now and is continuing to bounce around like a rubber ball. And with her at the gathering was another in the “few good women” category — Kristine Shook, a retired Marine chief warrant officer.