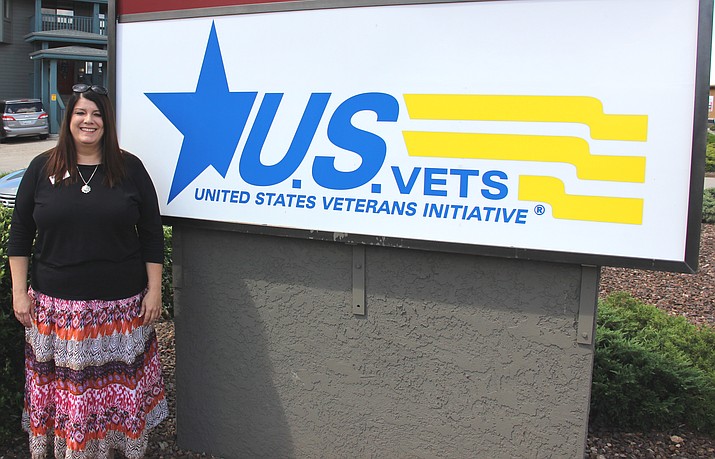 Carole Benedict has been the Executive Director for U.S. Vets-Prescott since September 2015.

U.S. VETS Executive Director Carole Benedict rarely misses a chance to fight for affordable housing and services so as to better the lives of homeless veterans, as well as non-veteran homeless men and women.

For the last two years, she has been striving to find any dollars that might be available to expand the transitional living opportunities her agency offers to its client’s — they served 182 homeless veterans last year — with the ultimate aim of directing them to permanent, supportive housing opportunities.

In the last five months, Benedict’s efforts appear to be paying off.

With the help of a local developer and the support of other veteran advocates and nonprofit homeless advocates, Benedict is championing the potential for a new campus on Whipple Street to replace her agency’s now leased space at a renovated motel on Gurley Street for 56 clients. The new space would offer room for various on-site services that their current facilities cannot accommodate.

In addition, Benedict is seeking assorted federal, state and foundation grants that would enable 22 low-income or formerly homeless veterans to rent studios as part of a larger complex of 88 affordable units. The remaining units would then be available for non-veterans, with case management services to be provided to those individuals to enhance their chances of long-term housing success.

The proposal is now before city leaders.

“We’re crossing our fingers,” Benedict said of the project that is more than 18 months away but signals an opportunity that fellow non-profit homeless advocates recognize as a strong step in the right direction.

The Coalition for Compassion and Justice Executive Director Paul Mitchell has agreed to collaborate with Benedict on this project as much as possible because both are adamant that the only way to end homelessness in Prescott, or anywhere, is to offer low-cost housing for those who need it most.

At Thanksgiving time last year, CCJ was donated a building no Madison Avenue where the agency now operates an emergency shelter with beds for up to 45 men and women as well as their other community outreach programs to that population and other low-income individuals. In April, Catholic Charities in Prescott leased the renovated former American Motel on East Gurley Street into what are 28 studios, and two one-bedroom affordable apartments. Those units were all rented within about a week, nonprofit leaders said.

This week, Mitchell hailed this pending project as one he hopes comes to fruition for the sake of homeless veterans and others who are desperate to find a place to call their own.

The 2017 Yavapai County Point-In-Time survey conducted in January showed that on one night in January there were 167 homeless individuals, 102 of them unsheltered. Of the sheltered homeless, 65 percent of those were veterans.

“What we’ve learned in our CCJ work with clients who are veterans and non-veterans is that it is absolutely the choked availability of housing that is causing us not to change homeless into homes,” Mitchell said. “We have done work with people to arrange bank accounts, get regular incomes, obtain Social Security benefits, but we don’t have the housing stock.

“U.S. VETS efforts to open up however many units will be a great blessing,” Mitchell concluded.