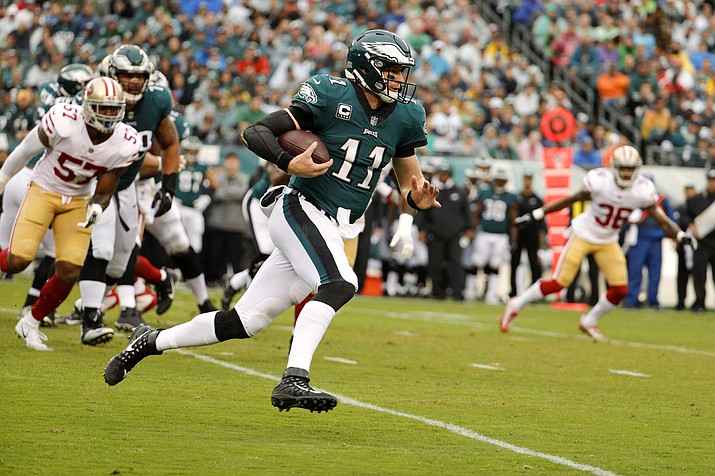 The Eagles (7-1) overcame a slow start on their way to a sixth straight win. The 49ers are 0-8 for the first time in franchise history.

Wentz was 18 of 32 for 211 yards and one interception. He threw a 53-yard TD pass to Alshon Jeffery and 1-yard TD pass to Zach Ertz. He leads the NFL with 19 TD passes, most by an Eagles quarterback through eight games.

C.J. Beathard shoveled a 21-yard TD pass to Matt Breida and finished 17 of 36 for 167 yards with two interceptions in his second career start.

The Eagles punted on six of their first eight possessions before opening it up in the third quarter.

Wentz hit Jeffery with a perfect pass to extend the lead to 27-7. After Derek Barnett blocked Robbie Gould’s field goal, the Eagles drove 62 yards and LeGarrette Blount ran in from the 12 for a 33-7 lead.

DETROIT — JuJu Smith-Schuster scored on a 97-yard touchdown pass from Ben Roethlisberger late in the third quarter and the Steelers forced the Lions to turn the ball over on downs twice.

The AFC North-leading Steelers (6-2) go into their bye week with a three-game winning streak.

Detroit (3-4) was coming off its bye and lost a third straight and fourth in five games.

Pittsburgh’s defense put up a curtain in front of it end zone, forcing the Lions to settle for field goals. When they went for touchdowns, the Steelers stopped them.

LONDON — Case Keenum threw for two touchdowns and Kai Forbath made four field goals in the last of four games held this season in Britain.

Adam Thielen had five catches for 98 yards and a touchdown for the NFC North-leading Vikings (6-2), who trailed 13-12 at halftime — the first time the Browns, 0-8 for the second consecutive year, claimed a mid-game lead this season.

Cleveland, without starting left tackle Joe Thomas for the first time since 2006, scored first, taking a 6-0 lead on its second play from scrimmage before kicker Zane Gonzalez’s missed extra point.

Playing in a driving rainstorm that made it difficult to hold onto the ball, let alone throw it, Dak Prescott completed 14 of his 22 passes for 143 yards as Dallas (4-3) heeded the message on Elliott’s cleats to “Feed Zeke.” With another hearing on his NFL suspension coming Monday, Elliott carried the ball 33 times, scored twice for the second consecutive game, and surpassed 100 yards for the third week in a row.

The Bills improved to 4-0 at home for the first time since winning their first five home games of the 1995 season.

Fumbled snaps, dropped passes and a big-time drenching at MetLife Stadium had both squads trying to find their footing, but the Falcons (4-3) steadied themselves just enough to snap a three-game skid — all to other AFC East teams.

It was the fourth straight victory for the Patriots (6-2). The loss snapped a three-game win streak for the Chargers.

Los Angeles (3-5) got on the board first when Melvin Gordon found a seam on the outside and rumbled down the sideline for an 87-yard touchdown run. But the rest of the game was marked by Los Angeles’ mistakes and inability to move the ball offensively.

NEW ORLEANS — Drew Brees completed 23 of 28 for 299 yards against a Bears defense that ranked sixth in pass defense for the Saints’ fifth straight win.

The Saints were threatening to score twice in the fourth quarter when the Bears stripped the ball from Ingram. Chicago converted the first fumble into its only touchdown with 3:43 to go on Tarik Cohen’s short dive over a pile of players at the goal line.

CINCINNATI — Lineman Carlos Dunlap batted Jacoby Brissett’s pass into the air, grabbed the ball and ran 16 yards to the end zone for a game-turning touchdown.

The defensive end excels at swatting away passes — he led NFL linemen last season — and changed the game with his third career score.

The Bengals (3-4) couldn’t protect Andy Dalton or get much pressure on Jacoby Brissett, who was sacked 10 times during a 27-0 loss to Jacksonville the previous week — the first time Indianapolis was blanked in 15 years.

Down 38-34 with 1:39 left and out of timeouts, Wilson took Seattle 80 yards in barely a minute. He hit Paul Richardson for 48 yards on a jump ball to start the drive, found Tyler Lockett for 19 yards, and drilled a strike to Graham for the winner.

Deshaun Watson was nearly the equal of Wilson, throwing for 402 yards and four touchdowns. But the rookie couldn’t come up with a final answer and was intercepted by Richard Sherman with 7 seconds left on a desperation throw.

Cam Newton rebounded from a subpar performance in a 14-point road loss to the Bears, leading a 17-play, 82-yard TD drive that consumed more eight minutes of the opening quarter. He then completed three passes to Christian McCaffrey to set up a field goal for a 10-0 halftime lead.