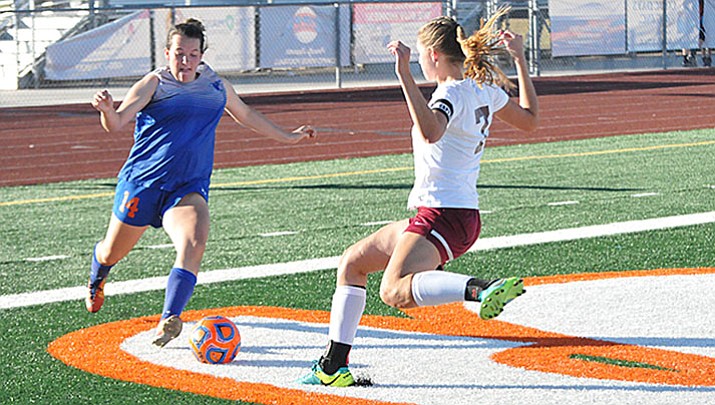 In order to defend its 2016 state title, Chino Valley’s girls’ soccer team had to play its best match of the season against top-seeded Northland Prep in the 90-degree heat of Gilbert on Saturday afternoon.

As it turned out, a repeat 2A championship simply wasn’t within the Cougars’ grasp.

The Spartans finished the fall with a 21-0 record, outscoring the opposition a combined 130-10, including 19-1 in their last four matches. Northland Prep had been building toward this moment. The Spartans were state runners-up in 2014 and state semifinalists in 2016. This year’s team consisted of five seniors, six juniors, two sophomores and eight freshmen.

One of those freshmen, selfless, persistent forward Ellie Karren, was the hero. Coming off the bench, she registered a hat trick of three goals, including the go-ahead strike with 8 minutes and 29 seconds left in regulation and an insurance tally with 1:45 to go that sealed it.

“It is really awesome, but I couldn’t have done that without all my teammates,” Karren said of her performance. “It is a personal goal. But it’s not just a personal goal, at the same time, because my teammates and I put in the effort.”

Afterward, the Northland Prep players expressed myriad emotions, from cheers and laughter to tears of joy and gratitude for how far they had come as a program. The girls’ soccer team captured the school’s first state championship in any sport, which wasn’t lost on the players or the coaches afterward.

“Twenty-one and O is pretty incredible,” Spartans co-coach Michael Blair said. “And to give up a goal against a great Chino team, and they battled and battled, our girls stuck with it. And in the end, we were able to overcome it. It was great to have to play Chino in the final and have to take over the championship from them.”

Added senior defender Laney Page, who had shed a few tears, “I hope, from this year on, it becomes the mentality of every team [at Northland Prep to want to succeed]. We are going to be the starting place. I want the soccer program to continue building, and I want the school to really have it.”

Chino Valley ended the fall with a 15-5-1 record. Four of those five losses came to Northland Prep, a public charter school established in 1996 in Flagstaff. Before Saturday, the Cougars had lost to the Spartans 2-1, Sept. 12; 6-1, Sept. 16; and 3-0, Oct. 18. In 2016, Chino Valley pieced together a similar run, compiling a 20-0-1 record en route to the 2A title. That championship represented the program’s first.

“We started this season off a lot rougher than we did last year,” Cougars sophomore midfielder Ashley McGuffey said. “I’m so proud of the girls. We’ve come a really, really long way.”

Northland Prep’s relentless attack made the difference in Saturday’s match. Chino Valley sophomore goalie Kacey Matthews kept her team in contention early and often, diving for saves and directing traffic for the defenders.

“They outplayed us — we ran out of gas,” Cougars coach Allen Foster said. “They out shot us, and they earned every bit of it. But it’s not over for us. We’ll go back to work on Monday and remember how it felt today and come back out and work that much harder.”

“We’ve had a problem finishing all year, and so this week we were practicing on the turf field, getting used to it, and we looked great,” Nichols added, referring to Campo Verde’s artificial surface. “We just couldn’t find the net and, if we did, it was right to the keeper.”

About midway through the first half, the Spartans struck first when Karren broke free in the box, scoring on a shot from left to right and into the net. But a stalemate ensued for the remainder of the period.

Trailing 1-0 at halftime, McGuffey drained the equalizer 1-1/2 minutes into the second half, booting in a loose ball in the box after midfielder Lauren Foster’s free kick was knocked out and landed at her feet.

The Spartans survived a scare during that sequence with McGuffey when starting freshman goalkeeper Payten Schmidt suffered an injury. Writhing in pain for several minutes in the goal box, Schmidt was replaced by senior Lauren James for the next 5 minutes of regulation until she was cleared to return.

Northland Prep continued to attack behind its crisp forward passing for the rest of the second half. The Spartans struggled, however, until the final 10 minutes of regulation when Chino Valley’s back-line defense started to tire. With 8:29 left, the Spartans took the lead for good when freshman midfielder Mia Blair broke free in the middle of the field and found an open Karren for an open shot that she lined into and past Matthews’ arms.

“We definitely needed to finish our shots, and we had opportunities to finish our shots that we didn’t finish,” McGuffey said. “Those are key components to the game. If you don’t get those finishes in, then that might be the difference between a win and a loss.”

Up 2-1, Northland Prep took care of the ball and secured the victory when Karren scored her final goal on a pretty pass from senior striker Brianna Hovis after a Blair corner kick.

“At the beginning, we were just trying to get used to how we were going to get through them [Cougars’ defenders],” Hovis said. “At the end, we figured out that we had to push together more and actually connect instead of having some through-balls, which really paid off in the end because that’s how we scored our last two goals.”

Hovis, one of the smiling Spartans, couldn’t contain her happiness afterward — despite being sick.

“It is a wonderful feeling — I can’t believe it right now,” a congested Hovis said. “We just played it game by game, and the more it added up I was like, ‘Man, we’re really good!’

“This is our family, and I’m so happy to win it with them because I love all of them.”