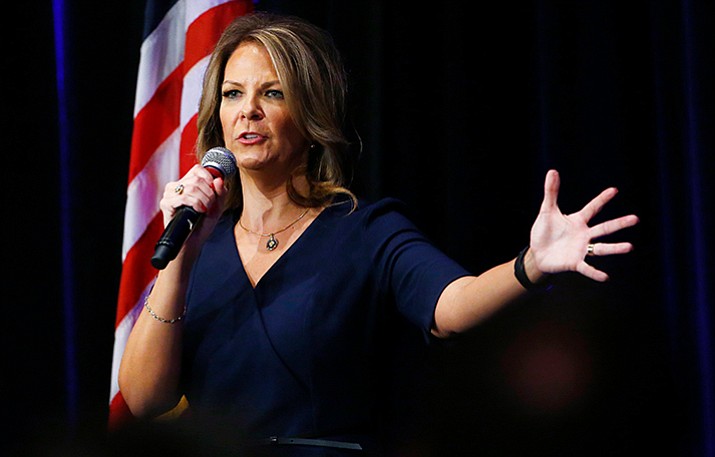 Former Republican Arizona state Sen. Kelli Ward was expected to run against Republican U.S. Sen. Jeff Flake in the Arizona 2018 primary, but Flake has bowed out of a re-election, announcing his retirement on Tuesday. (Ross D. Franklin/AP)

PHOENIX — The upstart tea party Republican who challenged Arizona Sen. John McCain last year and then set her sights on the state’s junior senator is suddenly in the national spotlight.

Former state Sen. Kelli Ward said Tuesday that Sen. Jeff Flake’s decision to bow out opens a clear path for her to win his U.S. Senate seat next year. But those statements come even as Arizona Republicans are looking for other candidates to put on the ballot because they consider her unlikely to be able to knock off Democratic Rep. Kyrsten Sinema in the general election next year.

“It’s not about the candidate, Kelli Ward, it’s about protecting that seat and keeping it a Republican seat and keeping the seat, quite honestly, away from Kyrsten Sinema,” said Robert Graham, the former chair of the state Republican Party, who is one of a host of people considering jumping into the race. “And I don’t believe, and many people don’t believe, that Kelli Ward is that person.”

Ward pushes back, saying people like Graham and the other potential candidates are establishment Republicans out of touch with the movement that elected President Donald Trump and that they don’t like the independence she showed in the state Legislature.

“Some people in the establishment don’t like that idea, but the voters do. And that’s why I’m not only electable in a primary, I’m extremely electable in a general election,” Ward said in an interview Tuesday. “We’re on a winning path here, and we’re not going to let up.”

Ward, 48, is a West Virginia native who moved to Arizona in 1999 and worked as an emergency room physician in Lake Havasu City and nearby communities. Her husband is also an ER doctor and served in the Arizona Air National Guard.

She said she decided to run for office in 2011 after the passage of the Affordable Care Act, which she calls in speeches “an assault on health care liberty and on health care freedom.” After the U.S. Supreme Court in 2015 upheld the tax credits that help lower-income people buy insurance, she compared the law on Twitter to slavery and prohibition.

It’s not just Arizona Republicans who believe Ward won’t make it out of the primary. Steven Law, head of a super GOP PAC, said Monday that Ward “will not be the Republican nominee for this Senate seat in 2018.”

McSally’s name became oft-mentioned as soon as Flake announced his retirement on Monday, because she’s seen as electable as a both a moderate and a strong backer of Trump’s agenda. Her southern Arizona district is one of just three in the state considered competitive. She has secured it well but is facing a challenge from former Democratic Rep. Ann Kirkpatrick next year.

Ward said she would hammer McSally in a primary race and said she needs to concentrate on winning re-election in her House district to ensure it remains in Republican hands.

“I know the Republican Party has already invested a lot of money in Martha McSally to stay in that seat and to stay strong, and I hope that she will,” she said. “Because there is certainly no reason for any other Republican to get into this race.”

The Republican hopefuls are waiting for the results of new polls to see who they think could beat Sinema, and Ward, who looks unmovable. Depending on the outcome, more GOP candidates could appear.