World Series Preview: How the Astros and Dodgers match up 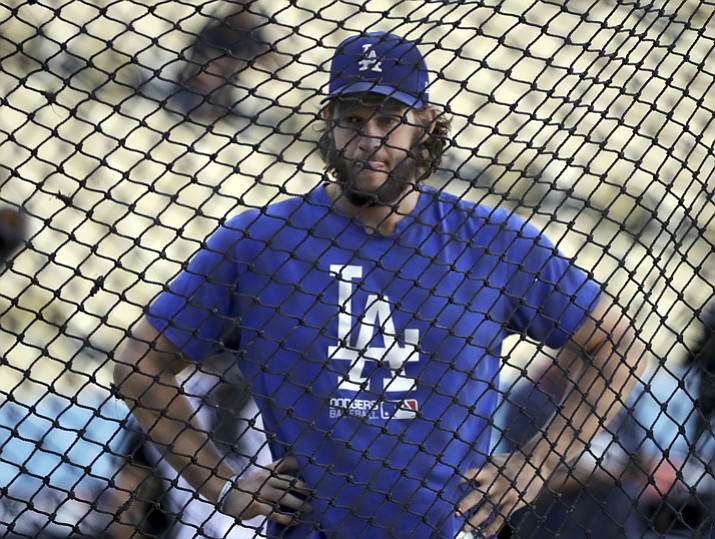 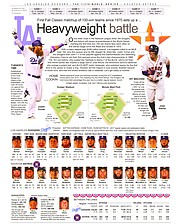 Astros: Yuli Gurriel. The 33-year-old rookie from Cuba has made a pretty smooth transition to the majors after signing a $47.5 million, five-year contract. A right-handed hitter with pop, he’s solved a problem spot for Houston at first base and provided a clutch bat in October, batting .366 in the AL playoffs.

Dodgers: Cody Bellinger. The runaway favorite for NL Rookie of the Year, Bellinger set an NL rookie record with 39 home runs — second in the league this season to Miami slugger Giancarlo Stanton (59). Bellinger made his debut April 25 and wound up leading the team in RBIs (97) and runs (87). His natural power belies a lean build, and he’s shown an excellent glove at first base. His father, Clay, was a light-hitting backup on championship teams with the Yankees.

Astros: Jose Altuve. Size matters not. The 5-foot-6 (and that’s generous) dynamo is one of the best players in the game. Altuve batted .346 this season, winning his second straight batting crown and third overall. He clocked 24 homers, stole 32 bases and had 204 hits to lead the AL for the fourth season in a row, making him a top contender for MVP along with giant Yankees rookie Aaron Judge. Altuve put on a show in the playoffs, too, hitting .400 with five homers to go with acrobatic defense and daring baserunning. That performance included three home runs in the Division Series opener against Boston, two off Chris Sale. At the plate, Altuve hammers even the hardest heat.

Dodgers: Logan Forsythe or Chase Utley. After two productive seasons with Tampa Bay, the right-handed-hitting Forsythe was obtained in an offseason trade but dipped to .224 with six homers and 36 RBIs. He has a good eye at the dish and is batting .316 in his first postseason. The 38-year-old Utley, a six-time All-Star from 2006-14, remains a hard-nosed player who sees time against righties. Utley homered in his first World Series at-bat with Philadelphia in 2008 and has a wealth of postseason experience. He’s 0 for 9 with four strikeouts this year, though.

Astros: Carlos Correa. The first pick in the 2012 amateur draft out of Puerto Rico, the 23-year-old Correa is one of baseball’s brightest young stars. The 2015 AL Rookie of the Year is an outstanding athlete who has power to all fields and can really play shortstop.

Dodgers: Corey Seager. Another one of the game’s top young talents, the 23-year-old Seager was last season’s NL Rookie of the Year and finished third in MVP voting. A two-time All-Star already, Seager is expected back in the lineup after missing the NL Championship Series against the Cubs with a back injury.

Astros: Alex Bregman. Drafted second overall in 2015 out of LSU, Bregman batted .284 with 19 homers, 71 RBIs and 39 doubles this year in his first full major league season. He hit .190 in the playoffs but did have two homers, two doubles and five RBIs. He’s a converted shortstop with good skills at the hot corner.

Dodgers: Justin Turner. The red-bearded bopper, a part-time player with minimal power early in his career, was cast off by the Orioles and Mets. He caught on with the Dodgers in his native Southern California, remade his swing and morphed into a very dangerous hitter who earned his first All-Star nod this year. Turner was co-MVP of the NLCS after socking a game-winning homer, and he’s a .368 career postseason hitter with five homers and 24 RBIs in 26 games. What a find.

Astros: Brian McCann or Evan Gattis. A seven-time All-Star from 2006-13, the 33-year-old McCann was traded by the Yankees last offseason to make room for Gary Sanchez behind the plate. After an 0-for-20 slump, McCann delivered a couple of big hits in the final two games of the ALCS to help beat New York — which must have felt good. He isn’t quite the hitter he used to be, but McCann remains a steady and respected leader. The brawny Gattis offers raw power from the right side and sometimes catches against lefties.

Dodgers: Austin Barnes or Yasmani Grandal. With an .895 OPS in 262 plate appearances and athletic defensive skills behind the dish, the surprising Barnes appears to have wrested much of the playing time away from Grandal at this point. Barnes almost certainly will catch the Series opener, though Grandal could get back in there against some right-handed pitching. He has 49 home runs over the past two seasons but is hitting .093 with one homer and 19 strikeouts in 43 career postseason at-bats — only five this October.

Astros: Marwin Gonzalez. The versatile switch-hitter can play all over the diamond and earned a regular role this year with a breakout season. Gonzalez batted .303 with 23 homers and a team-high 90 RBIs, but struggled at the plate during the playoffs.

Dodgers: Enrique Hernandez, Andre Ethier or Curtis Granderson. Hernandez, another utility player by trade, brings instant energy and a live right-handed bat that lands him in the middle of the lineup against lefties. He had a career night and a magical moment in the NLCS clincher at Wrigley Field, with three home runs and a record seven RBIs. The slumping Granderson seems to have lost his starting job against righties, but that’s where the depth on Los Angeles’ versatile roster really comes in handy. Enter the 35-year-old Ethier, an old pro who homered in the NLCS after missing most of the past two seasons with injuries.

Astros: George Springer. With rare power at the top of the lineup, the athletic Springer had 34 homers and 85 RBIs this season and made his first All-Star team. He hit nine leadoff home runs, most in the majors, and can definitely go get it in center field. Springer batted .412 with a homer and two doubles in the ALDS but only .115 (3 for 26) in the ALCS.

Dodgers: Chris Taylor. Another versatile player who has excelled after being pulled off the scrap heap by the opportunistic Dodgers. Taylor, like Turner, also changed his swing to generate more power and it paid off. The former Seattle shortstop came out of nowhere this season to establish himself as an everyday leadoff hitter, batting .288 with 21 homers, 72 RBIs and 17 steals. He helped fill in at shortstop for Seager during the NLCS and took home co-MVP honors with Turner after compiling a 1.248 OPS with two homers and four extra-base hits in five games.

Astros: Josh Reddick. Winner of a 2012 Gold Glove, Reddick spent the final two months of last season with the Dodgers after being traded from Oakland. He signed a $52 million, four-year contract with Houston in the offseason and batted .314 with 13 homers and 82 RBIs. He hit .375 in the ALDS but went 1 for 25 against the Yankees, finally snapping a long hitless skid late in the series.

Dodgers: Yasiel Puig. Bursting with tools and talent, Puig was aptly nicknamed “The Wild Horse” by revered broadcaster Vin Scully. The enigmatic outfielder from Cuba was runner-up for 2013 NL Rookie of the Year and a starter in the All-Star Game the following season. But he fell out of such favor with the Dodgers that they demoted him to the minors last year. He’s bounced back with the best full season of his career (28 homers, 74 RBIs), and put up huge numbers in the NL playoffs with a 1.169 OPS. Puig’s speed, rocket arm and powerful bat still come with some discipline issues, cocky antics and bat flips that rankle opponents. But his approach at the plate has matured and he’s playing consistently excellent baseball lately. Seems to be having plenty of fun, too.

Astros: Gattis or Carlos Beltran. Gattis is a throwback who doesn’t wear batting gloves and looks like some kind of mountain man. He swings his lumber like a club and has an incredible back story that brought him to the big leagues after he just about gave up baseball and was working odd jobs to barely make ends meet. The 40-year-old Beltran, one of the game’s greatest postseason performers, returned to Houston this season hoping for his first World Series ring. The respected switch-hitter went 1 for 12 with four strikeouts in the ALCS but has embraced his leadership role of wise and savvy veteran.

Dodgers: Ethier, Grandal or Hernandez. With AL rules in play when the World Series shifts to Houston for Game 3, the Dodgers will have plenty of options at DH. Ethier or Grandal could offer left-handed pop against a right-handed pitcher. Hernandez seems a lock to be in the lineup against lefties, at least. Seager might also show up in the spot, depending on how he’s moving defensively.

Astros: For a team that went all seven games in the ALCS, the Astros are in good shape with their solid rotation. They can start left-hander Dallas Keuchel (14-5, 2.90 ERA) in the opener and fellow Cy Young Award winner Justin Verlander in Game 2 on regular rest. Verlander is 4-0 with a 1.46 ERA this postseason, including his first career relief appearance. The ALCS MVP is 9-0 with a 1.23 ERA and 67 strikeouts in nine outings for Houston since agreeing to a trade from Detroit that was completed only seconds before the Aug. 31 midnight deadline for postseason eligibility. Charlie Morton (14-7, 3.62) and Lance McCullers Jr. (7-4, 4.25) combined to shut out the Yankees in Game 7. They both have good stuff and would make fine options for Games 3 and 4 in any order — if the Astros don’t need to use them too much out of the bullpen early in the series. McCullers, an All-Star in July, features a wipeout curveball and appears to be rounding back into form following an injury-plagued second half.

Dodgers: It all starts with Clayton Kershaw (18-4, 2.31 ERA, 202 Ks), who has waited his entire career for this moment, a chance to pitch in the World Series. The three-time Cy Young Award winner goes in Game 1 on regular rest at home. He won the NLCS clincher at Wrigley Field with a stingy outing, but has had his share of postseason struggles. The left-hander with five ERA titles and seven All-Star selections is 6-7 with a 4.40 ERA in 21 playoff games, including 2-0 this year. After that comes lefty Rich Hill (12-8, 3.32), who pitches well at home. Yu Darvish (10-12, 3.86, 209 Ks) was obtained from Texas at the July 31 trade deadline to give the rotation a right-handed ace and he delivered in the NL playoffs, winning both his starts. Left-hander Alex Wood (16-3, 2.72) hasn’t had a chance to pitch much in the postseason following the best year of his career.

Astros: On paper, this is where Houston comes up woefully short. While the Astros have several capable relievers with successful track records, including Chris Devenski, Will Harris, Luke Gregerson and closer Ken Giles, manager A.J. Hinch has been hesitant to use some of them in big games lately. Some are short on October experience, and the group as a whole hasn’t performed very well when called upon. Instead, the creative Astros have used starters such as Verlander, McCullers, Brad Peacock and Collin McHugh to fill gaps in the mid-to-late innings. Whether they can keep that up remains to be seen.

Dodgers: Anchored by Kenley Jansen, perhaps the most dominant closer in baseball, the Dodgers have a deep bullpen that’s been a big reason for their success. Los Angeles relievers have thrown 23 straight scoreless innings in the postseason, dating to Game 2 of the Division Series against Arizona. Jansen and setup man Brandon Morrow look untouchable right now, combining for 15 strikeouts and one hit allowed in nine scoreless playoff innings. The unit, which helped the Dodgers compile an NL-low 3.38 ERA this season, has only been augmented by starter Kenta Maeda and the midseason additions of left-handers Tony Cingrani and Tony Watson. Because of that lights-out bullpen, manager Dave Roberts doesn’t even ask his starters to go very far.