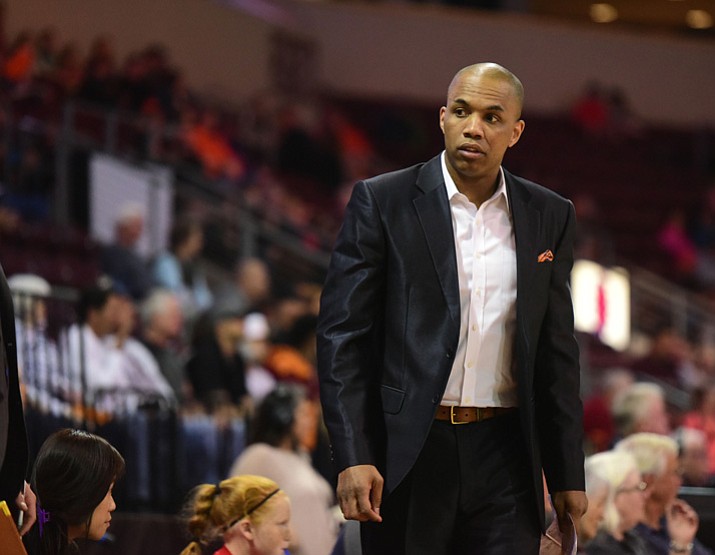 Tyrone Ellis paces the sideline during a Northern Arizona Suns game against the Austin Spurs on March 29, 2017, in Prescott Valley. (Les Stukenberg/Courier, File) 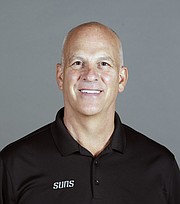 Entering his second year as head coach of the Northern Arizona Suns, Tyrone Ellis said after the 2017 NBA Gatorade League Draft this past weekend that he was looking forward to year two in Prescott Valley.

Well, “year two” will have to move on without Ellis, who was named an assistant under Phoenix Suns interim head coach Jay Triano on Monday morning.

Triano said Monday night after the Suns 117-115 win over Sacramento that he got to know Ellis pretty well during the Las Vegas Summer League, and during training camp in late September.

“Sharing ideas with him at training camp, I loved the way he thought about the game, [and] his work ethic,” Triano said. “Those are the people I wanted to bring in here to help me. I think his work ethic will be contagious. When the players see how hard coach works, the players work that hard as well.”

A replacement for Ellis to lead Northern Arizona into the 2017-2018 season is expected to be announced as early as Tuesday, according to team sources.

Training camp begins today for the Suns, which open the 2017-2018 season Saturday, Nov. 4, against Agua Caliente at the Prescott Valley Event Center.

Ellis, part of the G League’s inaugural 2001-2002 season as a player for the Canton Charge, spent four seasons in the league as an assistant coach for Tulsa, Oklahoma, Reno, Nevada, and Grand Rapids, Michigan, before taking a job with the Bakersfield Jam in 2015.

After the Phoenix Suns purchased the Jam in April 2016 and moved them to Prescott Valley, they named Ellis the club’s new coach for the inaugural season.

Ellis led Northern Arizona to an impressive 10-1 record to begin the season a year ago, but the G League club missed the playoffs after finishing 22-28 overall.

After graduating from David W. Carter High School, Ellis earned his bachelor’s degree in sports management and a master’s degree in kinesiology at Southern Nazarene University in 2001.

Ellis played four years for the NAIA Crimson Storm, finishing fourth all-time on the school’s scoring list with 1,822 points. He was second all-time in 3-pointers made with 248 in 129 total games.

Triano takes over for Earl Watson, who was fired late Sunday by Phoenix brass after an 0-3 start to the season and just hours after Suns’ point guard Eric Bledsoe tweeted out, “Don’t wanna be here.”

The former Kentucky standout was sent home before shoot-around Monday morning, and McDonough said the club is fielding trade offers for him.

Triano, a former Toronto Raptors head coach (2008-2011) and Portland Trailblazers assistant, was named Suns associate head coach under Watson in 2016 and is now charged with turning around a once-proud franchise that hasn’t made the postseason since the 2009-2010 season when they lost in six games to the Los Angeles Lakers in the Western Conference Finals.