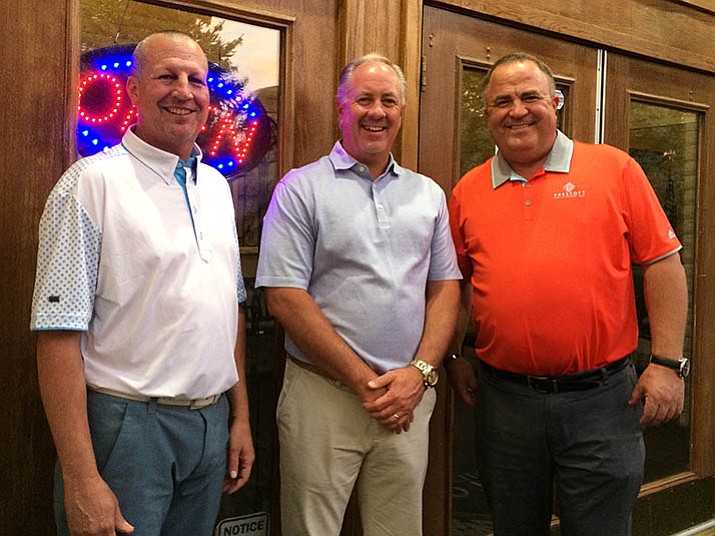 The ink was barely dry Monday afternoon when the celebration began with the new owner and management of the Prescott Golf and Country Club in Dewey.

The 18-hole, par-72 golf course officially changed hands this week when owner Michael Mathews signed the final paperwork and closed escrow. He already has begun improvements to the property that include filling potholes on the golf cart lanes, grinding out tree stumps, and cutting out dead wood.

“These are simple things that have an impact on the playability of the course,” Mathews, president and CEO of PGCC, said Monday.

Two other principal players in the change in management are Wyatt Collier and Justin Henderson, both PGA golf professionals and former employees at StoneRidge Golf Course and, more recently, with Wickenburg Ranch Golf and Social Club.

Henderson, general manager and a Prescott resident, was recruited three years ago by the Wickenburg course to be head golf professional. He is one of four Class “A” PGA golf professionals in the greater Prescott area.

“I have known since the age of 10 that I was going to be a golf professional,” Henderson said. His grandfather built one of the early homes in the PGCC, which was established in 1971, so he has fond memories playing golf with his grandfather and father.

Collier, director of club operations and a Prescott Valley resident, oversees the food and beverage services. He has more than 10 years’ experience in retail management, and worked for Tommy Bahama in Southern California and other golf courses and country clubs.

“JJ’s Bar & Grill will continue to operate as we work on plans to revamp it. By the spring of next year, we plan to implement the new format, including a name change and new menu, which will include Happy Hour, nightly specials and a Sunday brunch,” Collier said.

Plans also will incorporate enhancement of the banquet facilities for golf tournaments and special events such as weddings, anniversaries and birthday celebrations.

The semi-private club is open to members as well as the public. It includes a double-sided practice facility with driving tees, chipping and putting greens, fitness center, tennis court, basketball and pickleball courts, and swimming pool open during the summers.

Members Owen and Char Mollineaux were “pleased to pieces” with the change. Char plays four times a week and said Monday the course is in better shape.

“I’m pleased to see Prescott Golf and Country Club come back to what it was six or seven years ago. It had lost some of its appeal,” she said.

The Prescott Valley Town Council recently approved rezoning a portion of the property to allow for development of condos. The state requires a 30-day appeal period before the rezoning takes effect.

“We’ll have an official statement on the condos in a few weeks,” Mathews said. The focus right now is on making upgrades and improvements to the golf course. “We’re definitely postponing plans for development on that parcel.”

The former owners, Jessica and Jeff Hall, worked three-and-a-half years with the PV Planning and Zoning Commission and the town council in a contentious bid to rezone two parcels. They have owned the property for the past six years.

“We’ve had a long, very good relationship with the Halls, and I expect that will continue,” Mathews said. “Justin also has known Jeff.”

He said it was important to the Halls, as they evaluated the long-term plans, that the group that bought the course would carry on the tradition of the club and give it the attention and resources to continue to be successful. About 90 percent of current employees will remain, with a couple that are going on winter break, he said.

“It’s a dream come true for all of us,” Collier said.

On Saturday, Nov. 11, the public is invited to attend an Introduction Party from 3 to 6 p.m. with music and entertainment. In addition, the day begins with a veterans’ salute and flag raising ceremony at 8 a.m. as part of the Veteran’s Day Golf Tournament.