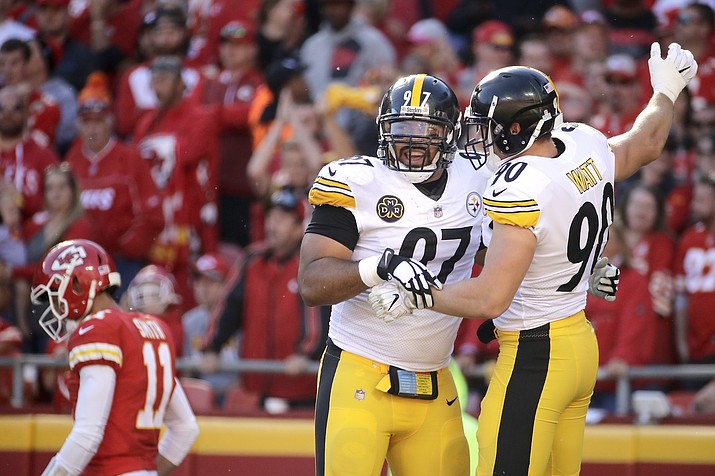 Pittsburgh Steelers defensive end Cameron Heyward (97) and outside linebacker T.J. Watt (90) celebrate after making a tackle during the first half of an NFL football game against the Kansas City Chiefs Sunday, Oct. 15, 2017, in Kansas City, Mo. (Charlie Riedel/AP)

KANSAS CITY, Mo. — Le’Veon Bell ran for 179 yards and a touchdown, Antonio Brown made an acrobatic touchdown catch in the fourth quarter and the Steelers handed the NFL’s only unbeaten team its first loss with a 19-13 victory against Kansas City.

The Chiefs (5-1) still had a chance after Brown’s 51-yard reception made it 19-10, moving quickly downfield and getting a 33-yard field goal from Harrison Butker.

And when their defense forced a quick three-and-out, Tyreek Hill’s 32-yard punt return gave them the ball with 1:48 to go.

But after the Steelers (4-2) gave up a first down, James Harrison sacked Alex Smith on third-and-10, and the quarterback’s incomplete pass on fourth down left the NFL with no perfect teams.

Ben Roethlisberger was 17 of 25 for 252 yards for Pittsburgh, bouncing back from his abysmal five-interception performance against Jacksonville last week. His favorite target was Brown, who a few weeks ago was flipping over water coolers on the sideline but spent Sunday slinging high-fives.

MINNEAPOLIS — Harrison Smith led Minnesota’s defense in a thorough dismantling of Green Bay, as the Vikings knocked Packers quarterback Aaron Rodgers out of the game on Sunday with a broken collarbone during a 23-10 victory that drastically altered the course of the NFC North.

Smith had 1½ sacks on safety blitzes, a diving interception and two pass breakups, helping the Vikings (4-2) limit the injury-depleted Packers to a season-low 227 yards.

EAST RUTHERFORD, N.J. — Tom Brady set the NFL record for regular-season victories by a quarterback, getting his 187th.

The Patriots (4-2) were playing their first game in 10 days after beating Tampa Bay 19-14 on Oct. 5, and appeared a bit rusty early as they fell behind 14-0 in the second quarter against the surprising Jets (3-3).

The Chargers (2-4) had been done in by poor kicks this season, losing twice on misses by former kicker Younghoe Koo. Novak missed a 48-yard field goal in the first quarter, but it was a missed extra point by Tavecchio — after a high snap by Jon Condo early in the fourth quarter — that was the difference in a fourth straight loss by the Raiders (2-4).

BALTIMORE — Connor Barth kicked a 40-yard field goal with 2:08 left in overtime, and the Bears used a 167-yard rushing effort by Jordan Howard to beat the Ravens.

The Bears (2-4) blew a 14-point lead in the second half before coming through in overtime behind Howard, whose 53-yard run put Chicago at the Baltimore 40. After rookie Mitchell Trubisky completed an 18-yard pass to Kendall Wright, Barth delivered the winner.

ATLANTA — Jay Cutler threw a pair of touchdown passes, Cody Parkey kicked a pair of field goals and the Dolphins rallied from a 17-0 halftime deficit.

Matt Ryan had another crucial interception with the Falcons in position to at least attempt a tying field goal. Cordrea Tankersley got a hand on a pass intended for Austin Hooper and Reshad Jones swooped in to make the clinching interception with 39 seconds remaining.

The Rams (4-2) also blocked a punt for a score and a 10-point lead in the first half. Malcolm Brown returned the loose ball 8 yards for the franchise’s first such touchdown since 2005.

New Orleans (3-2), which has a winning record for the first time since its last playoff season in 2013, built a five-touchdown lead, only to gut out a remarkable bid by Detroit to pull off the greatest comeback in NFL history.

LANDOVER, Md. — Washington’s Kirk Cousins threw for two touchdowns, ran for a score, and also had an interception as part of an inconsistent performance against his past — and possibly — future mentor Kyle Shanahan’s winless 49ers.

The Redskins blew a 17-point lead before barely holding on.

Cousins was hardly at his most accurate in completing 25 of 37 passes for 330 yards against the team he has been linked to for next season because of his connection with Shanahan. The 49ers (0-6) remain unsettled at quarterback: Shanahan benched Brian Hoyer for rookie C.J. Beathard, who threw for 245 yards, a touchdown and an interception and nearly led an impressive comeback.

HOUSTON — Deshaun Watson threw for 225 yards and three touchdowns, becoming the first rookie in NFL history with at least three TD passes in three straight games. Watson has thrown 15 touchdown passes this season, the most in NFL history by a rookie in a team’s first six games. It equals the number of TD throws Brock Osweiler had in 15 games last season.

The Browns lost their 16th in a row on the road. Cleveland made yet another change at quarterback this week, benching rookie DeShone Kizer, who had thrown a league-high nine interceptions, for Kevin Hogan to make his first NFL start.

The results were much the same as Hogan threw three interceptions to keep the Browns (0-6) winless and drop coach Hue Jackson’s record in Cleveland to 1-21.