Walmart sees the future and it is digital 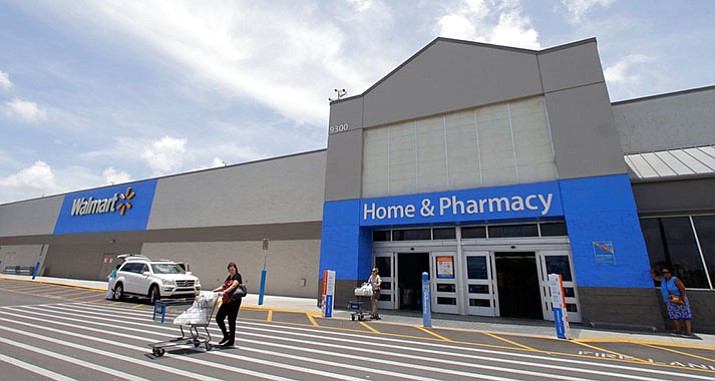 Walmart sees the future and it is digital, jumping into the fray against other businesses, such as Amazon.com. (Alan Diaz/AP)

NEW YORK — Walmart is all about online, anticipating digital sales next fiscal year will rise about 40 percent and that it will double the number of U.S. curbside locations for online grocery shoppers at its stores.

But the world’s largest retailer continues to scale back new store growth in the U.S., with plans to open only 25 in its fiscal year 2019, which ends January 2019. That compares with opening 230 new U.S. stores during fiscal 2016.

The retail behemoth is predicting net sales growth at or above 3 percent, driven by online sales and growth from existing stores for the next fiscal year.

The company reiterated its per-share earnings guidance for next year and launched a two-year, $20 billion share repurchase program.

Shares rose more than 4 percent on the news.

“No doubt we are in a transformational period of history,” said Doug McMillon, CEO of Walmart Stores Inc., in an address this past Tuesday to investors at an annual meeting in Bentonville, Arkansas. “Our future is looking more digital.”

The retailer is armoring up online to take on Amazon.com and more traditional rivals, like Target. Walmart paid more than $3 billion for online retailer Jet last year to speed its evolution. It’s been acquiring smaller players like ModCloth, Moosejaw and Bonobos. It’s also deploying digital kiosks called Pickup Towers at a hundred of its stores which spit out products bought on Walmart.com.

But it has an eye on expanding on groceries online, an underserved market. Walmart has fast expanded the number of U.S. stores that allow online grocery shoppers to pick up orders at the curb. Currently 1,000 U.S. locations are participating.

Walmart is also testing the idea of a new service in Silicon Valley that lets a delivery person walk into shoppers’ homes with internet-connected locks when they’re not there to drop off packages or put groceries in the fridge.

The company went live with voice-activated shopping with Google in answer to Amazon’s Alexa-powered Echo devices. Walmart said customers can now start shopping for more than 2 million Walmart items via Google Assistant as well as Google Express and its app. Walmart announced its partnership with Google in August.

And starting next month, returns may be getting easier. Customers can scan goods they no longer want with a smartphone and drop them off at a customer service desk. Walmart says that will take 35 seconds or less. Returns right now take about four times that, not including any wait in line.

Earlier this year, Walmart revamped its shipping program and now offers free, two-day shipping for online orders of its most popular items with a minimum purchase order of $35.

Walmart says it’s critical to get shoppers to spend both online and in stores. Store shoppers who become online customers spend nearly twice as much overall. And those who use online grocery pickup buy more overall.

But as Walmart moves into the digital space dominated by Amazon, Amazon is encroaching on the physical realm to win over more customers.

In August, Amazon closed on its $13.7 billion purchase of Whole Foods Market and quickly lowered prices on key products. It also cut a deal with Kohl’s that allows for the return of Amazon goods at stores in Los Angeles and Chicago, which are packaged and shipped out by workers there.

Moody’s lead retail analyst Charlie O’Shea said Walmart is giving shoppers a “compelling online alternative to Amazon” and views its online sales forecast as an “impressive goal, especially on the heels of the 30 percent (growth) outlined at the 2016 investor meeting, which at the time seemed aspirational.”

Walmart has increasingly linked its massive fleet of stores with online services, but the emphasis on expanding the number of stores it runs, at least in the near future, has ebbed. Walmart expects to open less than 15 SuperCenters and fewer than 10 Neighborhood Markets in the U.S. next year. It opened 40 new supercenters this year, down from 60 supercenter openings the last fiscal year.

“The redeployment of significant capital expenditure dollars from new stores in the U.S. to online improvements and store remodels, especially the 1,000 store increase in in-store grocery pick-up locations, will help Walmart maintain its market-leading position in the US grocery segment,” O’Shea said.